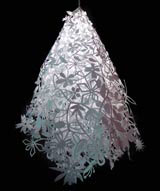 A new generation of lighting designers is determined to push the boundaries of the discipline. Straddling art and commerce, they flirt with both craft and hi-tech, producing mesmerising one-offs and batch-produced products with equal verve. They experiment with technology, materials, shapes and structures, but, above all, they seem to be united by an emotional connection with the medium, which brings them to design poetic, ironic and scintillating creations.

Achille Castiglioni and Ingo Maurer’s past work provides the proof that sublime lighting could be channelled into mass production. Yet in the UK, lighting designers previously seemed to lag behind. This perception is set to change with Brilliant, the Victoria & Albert Museum’s first exhibition on lighting.

As Jane Pavitt, curator of the show and University of Brighton research fellow at the V&A, explains, ‘If we had done this show ten years ago, we would have shown hi-tech, Modernist Italians. Today, it is largely a crowd of young UK and Dutch designers from different backgrounds. Although we might show Moooi, Flos and Artemide, Brilliant is not a show on the manufacturers, but on the designers who work with them. There are a lot of self-produced designs that are heading on to the market,’ she says.

Designers are expressing themselves in lighting, explains Pavitt, because it combines many qualities that are fundamental to every designer’s path. For example, it appeals to Dutch designers such as Marcel Wanders because ‘they are interested in low tech, in the transition between craft and design, in the emotive and witty potential of light’. Ultimately, she says, light is a metaphorical subject.

Brilliant looks at the effects that can be achieved via light, focusing on technology and materials. It is separated into two galleries: a selection of domestic lights and nine conceptual installations. One exhibit, Midsummer Lights, is by romantic revivalist Tord Boontje – a garland made of new material Tyvek wrapped around an ordinary lightbulb. ‘[Boontje] is the epitome of that successful transition between one-off and mass production,’ says Pavitt. ‘His Garland light by Habitat [a mass-produced version of his Wednesday light] is an extraordinary design story. That a light of that quality can be made affordable means opening [up] a completely new market.’

Design Museum Designer of the Year nominee Paul Cocksedge (Profile, DW 30 October 2003) is another talent on display. He is only in his early 20s but, is already a master of the medium, combining a healthy sense of irony with technological maturity. ‘His work is an incredibly lyrical interpretation of the potential of light,’ says Pavitt. ‘These are experimental works that make you think.’ Cocksedge’s designs are also on the brink of mass production, so his debut in the commercial world could be confirmation of his provocative talent.

While most lighting designers have a product design background, some are more craft-based, using backgrounds such as jewellery and textiles to inform their shapes. Sharon Marston creates luminescent sculptural installations that have the fluidity of textiles. With a background in jewellery and an interest in more conceptual, performance-based work, she creates installation work and domestic products as well as designing for the theatre. She has worked in lighting for the past six years and treats lighting elements like fabrics.

‘I apply textile techniques such as knotting, pleating, folding and weaving to PVC and glass,’ Marston says. Four years ago she became interested in fibre optics – a technology that constitutes the backbone of her work. She uses light as part of a structure rather than creating a form in which the light is inserted.

For the V&A show Marston is displaying Autumn light, a variation on the April light exhibited at 100% Design last year. The light, a cascade of fibre optics and a flurry of organic shapes coloured in autumn reds, yellows and oranges, ‘looks like rain and it plays on the seasonal palette’, she says. Although Marston defines her work as ‘quite abstract’, most of her designs are in production, showing a sound commercial attitude.

The company Innermost is producing four of her designs, while she batch-produces the Cocoon and Feather lights herself. Marston’s installations have graced the lobbies of hotels, London’s Bluebird restaurant and the Kit Kemp-owned Pelham cafÃ©.

The V&A show reflects a renewed attention towards lighting design found in retail, hotels and arts organisations. A confirmation of the pulling power of lighting technology came when diamond institution De Beers approached lighting company Elumin8 Systems to create Christmas windows for its shop in London and the inaugural window for its new outlet in New York, due to open this September.

Over the past few years, the company has made a name for itself thanks to the adoption of a technology called Electroluminescent printing. The technology has its origins in military applications and Nasa space projects. Based on screen printing phosphors on to a conductive substrate, a small electrical charge is passed through and the phosphors illuminate. The sequencing and amount of luminosity can be controlled to create dynamic moving images and forms. An energy-efficient and environmentally friendly technology, it has been adopted by several designers, including Sam Buxton, Rachel Wingfield and Virginie Rondot.

Rondot, who trained in branding, worked with Elumin8 to create the De Beers windows. The aim was to use the light abstractly to give an idea of a diamond rather than imitate one: she ‘translated’ the De Beers ‘cut’ into an image that could be used in the window. Having been transfixed by the ‘revolutionary’ technology of Elumin8, Rondot is now leaving branding behind to focus on new installations, with a view to show at the forthcoming Milan furniture Fair.

Following the De Beers project, she has been commissioned to create an interactive wall project with Karen Mann, director of art and heritage at the Charitable Foundation. Located in London’s St Thomas’s Hospital, the 14m by 2.5m-high glass wall will respond to stimuli, movements and sounds. The artist/ poet Valerie Laws will produce poetry for the piece and Rondot is working with the text to create an installation that will change and react to it.

Elumin8 has such a close relationship with designers that it almost acts as a mentor and sponsor, supporting them both financially and with technology. As Richard Kirk, Elumin8 managing director, explains, although the company owns the technology, it needs well-designed, high-profile products to keep it going. Among several projects, it is currently working with students of the Royal College of Art’s interactive department on an interactive table and with Central St Martins College of Art and Design and Imperial College on a study of interactive responsive clothing.

‘There is certainly a renewed interest in lighting,’ notes Kirk. ‘This time light is being seen as a “form” in its own right. New technologies are making new types of lighting effects possible.’

As a showcase for the latest technology, lighting lends itself to experimentation; it is the ideal medium for the visions of new talents. Lighting design seems to have a bright future.