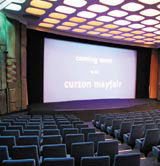 It’s hard to believe that film executives and cinema owners used to get cold sweats at the mention of the word ‘video’. It sounds as archaic now as the old VHS/Betamax debate, yet not so long ago the cinema industry was genuinely worried by the advent of home entertainment.

Fast forward to 2003 and movie-going is one of Britain’s major leisure activities. Today, more people go to the cinema than at any time in the past 30 years, according to the UK Film Council. Jestico & Whiles has even exported the multiplex concept to Bollywood-mad India (DW 12 June).

Yet most UK multiplexes would hardly win an Oscar for the quality of their visitor experience. Six major chains – UCI, Odeon, UGC, Cine-UK, Warner Village and National Amusements – control 70 per cent of the screens. Brand equity is negligible and it often feels like operators want to usher you out as soon as the credits roll.

Art-house venues, conversely, encourage urban sophisticates to discuss the Mexican New Wave over a post-film latte. What would it take to make the consumer the star of mainstream show?

‘We took a long, hard look at the other chains,’ says FutureBrand project director Andrew Phillips, who is working on rebranding Warner Village as Vue. ‘As a consumer, you’re essentially presented with a series of initials, with no personality whatsoever. We want to create something that is consumer-facing and easy-to-understand.’

Phillips is keeping specific ideas for Vue close to his chest. Design work, overseen by FutureBrand creative director Dennis De Rond, is expected to roll out over the next six months. However, he suggests large chains need to be much more welcoming towards their customers.

‘People tend to arrive just in time for the film and charge in to buy their tickets. They’re not comfortable [waiting] in the foyer.’

Phillips thinks the Hollywood sheen that is lapped up so enthusiastically by readers of Heat magazine could be reflected by the big chains. Another idea – perhaps more in touch with Vue’s plotting – involves screening football matches at cinemas. ‘Personality and programming’ is how he describes the approach.

According to RTKL senior designer Rupert Plumpton, everyone expects more than they did ten or even five years ago. ‘It’s [become] more of a night-out, rather than a junk culture experience,’ he adds.

RTKL has worked on The Filmworks brand for UCI. Despite the UK Film Council figures, Plumpton believes the market is slowing, with refurbishment rather than expansion the order of the day.

‘Across the board, we’re still seeing a continuing separation of the offer. EasyCinema, launched last month in Milton Keynes, is stripped down to the basics. At the other end of the scale, an upmarket offer continues to thrive, with luxury seats and waitress service.’

But the majors still work from the premise of having the best seats, the best screen and the best sound – all at bombastic levels. The result, a sort of techno-garishness, is fair enough for the 14to 20-year-olds who comprise a multiplex’s key audience, but what about the rest of us?

Robin Moore Ede positions the Curzon Mayfair in London as the ‘leading luxury cinema’, with ‘super-comfortable seats’ and the ‘best amenities’. Principal of the eponymous architectural practice, he designed the revamp of the Mayfair (unveiled in February). He also created the original designs for Curzon Soho refurbishment in 1998, which were then implemented by Panter Hudspith.

Ede approached the projects with ‘great reverence and enthusiasm’, he says, mindful of the family-run cinemas’ long heritage and standing with film buffs.

In this market, the cinema trip is once again a classy evening out. ‘People can’t go on watching videos forever. These kinds of cinema have got to be nice places. They are destinations for serious cinema-goers,’ says Ede.

At the Curzon Mayfair, care was taken to integrate technological upgrades seamlessly with the Grade II listed interiors. The economics of independent cinema meant the original 542-seat auditorium had to be spilt in two – creating a 320-seat space and a more intimate 83-seat screening room – but ‘most people can’t see the join’, Ede asserts.

The bars at the Curzon Soho, which are currently closed for repair for essential services, lend themselves to ‘all day use’. Consumers are positively encouraged to linger, but the chains, Ede suggests, are largely ‘cavernous places without any root or character’. Are the two markets irrevocably separate?

Plumpton implies the chains are starting to trade-up their designs, becoming a little more discerning. Some UCI cinemas have a mezzanine balcony to give the feel of an exclusive screening, others present a single preview screen and comfortable seating area in the foyer. Less may well be more.

At the same time, he says, there is no signature cinema design style. Bar design, even at the quality venues, will follow general trends. However, as Phillips points out, most multiplex customers don’t know which brand they have been in when they emerge from their ‘big black boxes’.

It’s about time some sustainable differentiation came blinking into the light.

A Nation of Film Fans