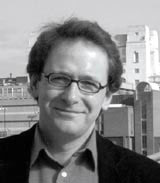 Despite the world being essentially the same all over, designers love to root out special little differences. We prefer to think there are deep cultural forces that shape things so that they become uniquely French, British or Scandinavian, say, rather than accepting that most things are copied from the US.

As a great reversal of American cultural imperialism, it’s refreshing that Chevy Chase stars in the ads for Cola Turka, Turkey’s indigenous cola brand, where he is seen hilariously and progressively ‘Turkifying’ the US.

Turkey is on the edge of familiarity and so provides room for crossover solutions. Perhaps that’s why Turkish clients and their British consultants get on so well. We bring novelty gained from all over the world, they select the wheat they want, studiously ignoring our clever chaff.

My first outing in Turkey created mild amusement, shared, I must say, with the client, who had surely seen many a raised eyebrow in the past. His name is Volkan, meaning volcano and his company is called Arcelik, which doesn’t mean volcano but is so ripe with possibility that only its cousin, Beko, can be used outside Turkey.

Working in Turkey offers designers freedom. A city of 13 million people, Istanbul is big enough to test market every new idea. Clients can quickly see what will fly among the ‘Stambul fashionistas before rolling it on to Izmir and then the farthest reaches that border Iraq. Regardless of Turkey’s probable entry to the European Union, there will continue to be lots of work. We have just got to take the opportunities seriously.

Designers may worry about some of the peculiarities of working in this market. Here are a few pointers:

In terms of new business in Turkey, it’s the same as here – you have to speak, write, publish a great job, whatever works for you. Turkish clients buying British are buying Harley Street, which means their problem either has to be big enough to be worth fixing from abroad, or it has to have snob appeal. Clients want global credentials and senior involvement in their project.

Most of the leading companies are owned by important families like the Koc and Sabanci Groups, whose bosses are instant shoe-ins for Alan Sugar. Be prepared to compromise on fees.

The big companies often prefer turn-key agreements, where travel is included. Negotiate your deal carefully. A running meter approach is unlikely to work. You may also have to accept unsavoury time or other penalty clauses.

It shouldn’t be slower than from anywhere else. You can ask for it up-front, but check first if this is what you would do with your UK clients.

Don’t overdo comparisons between the UK and Turkey. It’s easy to suggest that ‘we’ have all the answers. Be careful about suggesting that Turkey is not Europe, even though when you get there you may not think it is.

Don’t palm the client off with a junior rep – it will be seen as disrespectful; personal relationships matter.

Clients are educated and well-travelled. Don’t underestimate their expertise. Try to grasp quickly exactly what it is they want from you.

Meetings will generally be in Istanbul. You can get there and back in the day, but only for short meetings. Be prepared to spend at least a night away each time.

Choosing working partners sensibly is essential, otherwise U-turns will have a nasty habit of cropping up just when you are on your way home. As for local implementation, clients know a lot about this so you should focus on the quality and the specifications.

Religion, politics and society are clearly issues in their own right. But although Turkey is a secularised Islamic state, you won’t and shouldn’t have to consider religion or politics. Just stick to business.

There are a few other things – for instance, the Turkish language has two letter ‘i’s, one with a dot and one without which is tricky, so take care if you are doing an identity with an ‘i’ in it. Oh and finally, Turkey is two hours ahead, so you might want to avoid asking for meetings before 9.30am local time.

Tony Allen is chief executive of Fortune Street. This global group is working with a number of banks in Turkey

â€¢ Be ready to compromise your fees