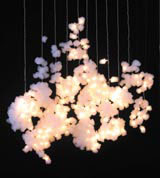 Questions about Europe may vex our politicians, but the tastemakers at the Design Museum find them far less problematic. ‘The basic premise is a whistle-stop tour through design practice over the past couple of years,’ says curator Sophie McKinlay of the second European Design Show, which builds on the success of the first, held in 2003. Everything from Williams Murray Hamm’s Jaffa Cakes packaging to Patrick Jouin’s nibbled honeycomb seating, from the aerodynamic marvel of the McLaren Mercedes MP4-20 Formula 1 car to Jess Shaw’s beautiful clusters of tubular lights, is included. So, what state is European design in? McKinlay fights shy of grand declarations. ‘The last thing I’d want is for people to think it was all fait accompli,’ she says. Rather than proselytizing ‘set themes’, she hopes to elicit a ‘discursive’ response. Is it fruitless, then, to seek unifying trends or regional characteristics? Probably. ‘National identity is still very important to each country, but I wouldn’t say it dictates an aesthetic,’ she says. ‘What’s important is designers’ rigour, their consideration.’ Behind the scenes processes are laid bare, and while it’s a moot point whether the visitor who thrills to rapid prototyping will be wowed by Lanvin’s ready-to-wear collection, boffins and fashionistas alike can purr over the new black – ‘a coating for metal alloy that’s 25 times blacker than normal black’.