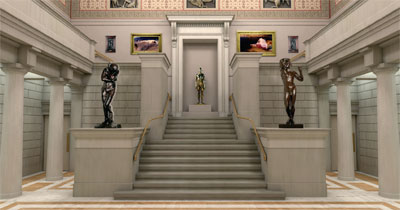 The digital gallery is a facsimile of the balcony gallery itself, and will open in the Victorian entrance hall of the Manchester Art Gallery on Friday.

The Grade I-listed entrance hall balcony underwent refurbishment with the rest of the gallery in 2002, with design by architect Michael Hopkins and Partners, but a decision was taken at the time not to re-hang any works in it.

This decision has since been overturned and the gallery has sought funding to reintroduce paintings and sculptures that look at the human form while developing its digital version.

Appointed following a four-way pitch in October 2010, Hemisphere sought to design the concept, look and construction of the interactive, which will appeal to disabled and able-bodied visitors alike, says senior designer Steven Wainwright.

’Some of the detailing on the balcony, especially on the friezes, is up to 20m high, so you’ll get a better view on the touchscreen than on foot,’ adds Wainwright. Detail includes a plaster frieze of the Elgin Marbles and a Metopes frieze.

A telescopic camera rig was set up to take detailed shots of the decorative work in the balcony ceiling, and individual works have been photographed in high resolution to allow visitors to zoom in to the level of brushstroke detail.

Content can be viewed as a 3D render of the space (pictured) as a virtual tour or in a more controlled way where a curatorial introduction is given to each selected work.

The consultancy worked with architectural visualisers Our Studio to help realise the 3D space.

Further content has been integrated for NHS mental health charity project Start in a separate section which sees works grouped together around body language to be used as a tool for therapy.

The touchscreen interface, which is lockable but moveable, will be housed in a bespoke kiosk with wheelchair access.

The beautiful and the damned

Message in a bottle