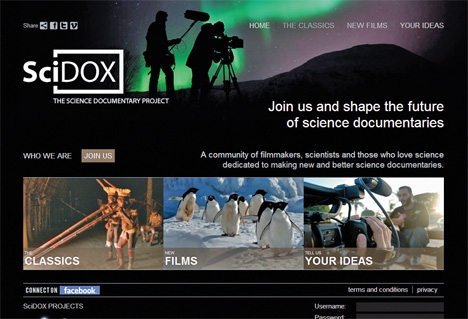 Baigent Digital has created a new brand and website for Scidox, a community of film-makers and scientists who make science documentaries.

The consultancy was appointed in October 2010 and briefed to create a brand that was simple, conveyed a sense of authority and quality, and had an ’institution feel’ to it, similar to the branding of the BBC or National Geographic, Baigent Digital creative director Steven Ramsay explains.

He adds, ’Scidox makes films for science enthusiasts. They have an academic approach with content and depth, and the brand had to reflect that.’

The marque features the project’s name with the ’dox’ part surrounded by a box to represent the screen.

Ramsay says, ’The logo aims to represent the idea of “capturing” science, real people capturing science as it happens, filming it first hand and putting it up for all to see and share.’

Writer, director and producer David Sington, who leads the Scidox project, says, ’We wanted the site to convey the essence of a documentary. In a documentary you have the power to tell a story and draw viewers’ attention to different aspects of that story in a structured way.

’We didn’t want a magazine-style website where you have to scroll down through lots of different stories and the content can be confusing.’

The main navigation of the site is built like a film strip, with three sections dedicated to new films, archived films and a ’Your Ideas’ section where members can suggest films they would like Scidox to produce.

The homepage features an image of the film-makers beneath a night sky, taken especially for the site, to evoke wonder but also give an impression of the crew in action, says Ramsay.

Chilli gets the cream