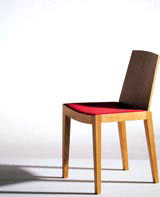 A family-run company started 20 years ago, Valencia-based Punt Mobles specialises in contract and household furnishing, as well as interiors. ‘It was started by my parents Vincent Martinez and Lola Castello,’ says 23-year-old Isabel Martinez, herself a designer. ‘They began their careers as designers, but soon decided to produce their own pieces.’ So far, the approach has paid off, with Martinez and Castello’s pieces still being the most popular sellers.

The company has always retained an international outlook, starting with a collaboration in 1989 with British designer Terence Woodgate, which produced pieces such as Home, a tall storage unit with a shutter and the River collection. This year at Valencia it presented Woodgate’s new design, Sussex, a simple cabinet in natural oak, again with a shutter front. Other 2000 offerings include a geometrical bed board by Isabel Martinez – available in maple or cherry, and Lola Castello’s Adras armchair on wheels.

Punt Mobles has also worked on a wide range of private and public interiors commissions, from university libraries to hotels and museums, all bearing their functional and light trademark style. Their most recent finished project is the Alicante headquarters for Panama Jack – a Spanish shoe manufacturer – while due to open this month is the Archeological museum in Alicante, and in 2001, the Holiday Inn and the Hotel InglÃ¨s, both in Valencia. Punt Mobles received the Spanish National Design Award in 1997.