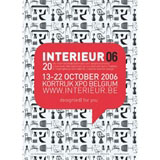 Is there really any need for another furniture fair? Can anyone really stand to benefit other than retailers of corn plasters? In its favour, you can at least say that Interieur 06, the furniture fair held in the little-known Belgian town of Kortrijk, near to Lille, is only held every two years.

So was there anything new on show? ‘Yes,’ answers a woman on the Moooi stand, pointing at the life-sized horse, shown at the Milan Furniture Fair, designed by Front, with a lamp sprouting from its body, ‘It now has spots.’ Quite. Like, say, IMM in Cologne and 100% Design, Interieur suffers from the pre-eminence of Milan. But if you missed Milan, Interieur offers you a pleasant, more manageable and nicely presented way of seeing what you missed in the flesh.

Of course, ‘new’ is relative – the possibilities of creating something new with furniture staples such as the chair seems nigh on impossible, so one is left in the realms of legions of ‘reinterpretations’. 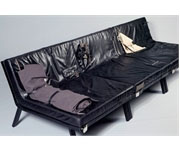 However, the Stash sofa – designed by Austrian Annette Hinterwirth and shortlisted for the Design for Europe prototype competition – by customising black leather as a Goth teenager might, showed a more exciting way in which some of these staples might be considered.