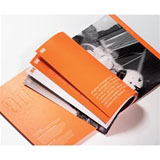 The Scottish Ambulance Service this week unveils its annual report designed by Hookson. The group won a four-way pitch last year to work on the ‘flexible’ three-year contract.

Hookson was given a brief to devise the concept and design for the report based on the idea of ‘delivering for health’.

‘It’s about teamwork and individuals who work within the service, and the job they do to save people,’ says Hookson creative director David Huckell.

Its design uses striking shades of orange to reinforce the idea of safety, while the protective outer package is made of silver bubble wrap. The report also features singer-sown binding and a French fold.

Hookson has been working with the Scottish Ambulance Service on smaller below-the-line projects since last year, but it is the annual report that accounts for most of its marketing budget.

‘This is quite a high profile project and it’s great to work with a client that gives us a lot of creative freedom,’ says Huckell.