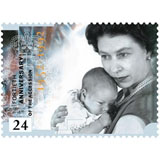 A noble canvas for micro art, or a humble indicia set for a hi-tech overhaul? The postage stamp is both, inspiring both trainspotter loyalty and commercial indifference. Jane Austin sticks to the issues

‘Off With The Queen’s Head’ screams the front page headline of the Daily Mail. Meanwhile, the Conservative Party declares the source of furore was an attempt to ‘airbrush’ the monarchy from British officialdom.

It’s amazing that the Royal Mail’s introduction of a postage system that allows the British consumer to buy and print their postage on-line as a bar code could cause such controversy. It’s move that, you would have thought, would be a godsend for busy professionals thus avoiding the substantial and depressing queues at the local post office. Apparently not, according to the press. The move was yet another example of crumbling British institutions, an attack on all that we Brits hold dear. According to The Times, it was a move that could send stamps to the ‘great wastepaper basket of history’, ‘A black day for philatelists’. Could it have been a quiet news week?

But that isn’t all. Italian car giant Fiat has recently sponsored a limited edition series of stamps that feature its logo and new Grande Punto, which can be used as normal stamps and reinvents the postage stamp as an advertising medium. And the long-standing Royal Mail rule that no living person outside the monarchy is allowed to feature on a stamp is now very relaxed. So laid back, in fact, that you wonder if staff in the Royal Mail stamp unit are sporting open-toed sandals?

‘Royal Mail is the only postal authority in the world that is permitted to not print the name of the country of origin on the stamp,’ says Philip Parker, head of stamps policy at Royal Mail. ‘It is the image of the monarch that signifies that the stamp is from the UK. It was a long-standing rule that the only living people that could be depicted were the Queen and members of the royal family. But this has been amended in order for Royal Mail to broaden the subject matter it chooses for stamps, as well as to enable it to celebrate significant events, such as major sporting wins.’

‘Of course, Royal Mail is a commercial business, and responds to the business climate; it is a contemporary organisation and we have been focusing on commemorating more contemporary subjects in the stamp programme,’ he continues. ‘But this is an emphasis in subject matter rather than commissioning.’

Michael Johnson, founder of Johnson Banks, the creator of the popular fruit-and-vegetable interactive stamps and forthcoming Beatles series (out in January), says, ‘I’m all for innovation, although the bar code stuff strikes me as a shame, but maybe it will allow people like me to make the “real” stamps more interesting. Although I do question why stamps, especially when we now have self-adhesive ones, require 0.09mm diameter perforations.’

Andy Altmann of design consultancy Why Not Associates created stamps depicting the Ashes. He thinks that the Royal Mail doesn’t want to be left behind. ‘People there are very aware that the Royal Mail has to develop and grow with the times,’ he says. ‘Quite how it does this, I am not sure, but it can still have traditional values and strong design ethics within a state-of-the-art modern institution. However, stamp design will certainly change because of the possibilities of digital printing technology and other developments like holography.’

While the themes chosen for a stamp programme have changed, the model of pitching and commissioning is constant since the inception of the procedure in 1965. The Queen approves all stamps, but before they get to her they go before the Royal Mail Stamp Advisory Committee, which involves design luminaries such as Michael Wolff and John McConnell, advertising guru David Abbott and TV personality Floella Benjamin.

Mike Dempsey, co-founder of CDT Design and current Master of the Faculty for Royal Designers, has a long history of designing stamps including the Millennium Stamps and the current standard first and second class definitive stamp. ‘The Stamp Advisory Committee is made up of designers, members of Royal Mail, business and the public, so it is quite a lengthy process. Three designers are usually commissioned to work on the same set before one is selected to go forward to the final stamp production,’ he explains.

While ‘the system’ may persist, philatelists are not so sure about the Royal Mail’s recent design choices. ‘The Post Office seems to have abandoned its concept of design,’ believes the Royal Philatelic Society of London’s Michael Pitt-Payne. ‘One is tempted to say that the British Post Office is now dominated by the need to be profitable. The design effort will probably be devoted to commemorative issues, which will be sold to collectors, while very little thought will be given to the design of machine images produced to indicate the payment of postage on commercial mail.’

Dempsey’s most recent project for the Royal Mail is the Cultural Diversity Through Music series, which launched earlier this month. He is supportive of the philatelists. ‘ The philatelic community is enormous and generates a substantial income, so I can’t see stamps disappearing for some time,’ he suggests. ‘I think the Special Stamp programme will continue much as it had when it was started by Tony Benn, who was the Post Master General in 1965. The philatelic community is as passionate as trainspotters and birdwatchers. They are an important element in deciding on the future of stamps.’

Johnson is looking for a silver lining. ‘I’d like stamp design to continue to innovate, continue to get more interactive and more exciting,’ he says. ‘I know that some people love their little square design jewels – that’s fair enough. But I’m more intrigued by pushing the possibilities of what we can do and where we can take it.’ 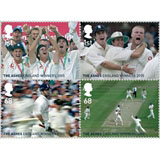 Royal Mail’s Parker sees that the future of stamp design is bright. ‘Developments in print technology permit printing in finer resolution, as well as opening up techniques we have used sparingly in the past – inks, holographic techniques and the use of microprinting and other security features,’ he says. ‘We will continue to produce stamps with designs that range in style and approach.’

So, it would appear that designers and the general public can look forward to more exciting developments in stamp design. Those who cherish the old format, however, will have to inhale deeply.