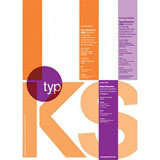 Typographic Circle chairman John Bateson is kicking off the organisation’s programme of events this week in an attempt to revitalise the group and boost its membership.

He hopes to raise awareness of the organisation among younger people and to drive up membership. ‘I’m focusing on the best use of our resources so that we talk to our members more easily – our new website will be a major help here. I’d also like to involve more students with a new “type is the hero” award initiative we are developing,’ says Bateson, who is also creative director of Corporate Edge.

The Typo Circle is to kick off its season of events with an exhibition of work selected by the New York Type Director’s Club. Showing at the offices of advertising agency JWT from tomorrow, the 52nd TDC Exhibition features the winning designs selected from 17 countries worldwide. The exhibition moves to Aspire Design in Nottingham on 10 November. Bateson has also lined up a talk by Kate Stanners, executive creative director of advertising agency Saatchi & Saatchi. It takes place on 26 October at JWT’s offices in London W1.

Other ideas being considered include the launch of a Font Fight event at The Ring, a London pub on the site of the first boxing ring in London, according to Bateson.