For the last three years, the Design Council, in collaboration with the South West Academic Health Science Network and social entrepreneur foundation UnLtd, has led the Transforming Ageing programme.

Through design-led, place-based social enterprises, the goal of the initiative was to explore how the experience of ageing could be improved, while also seeing how strain could be taken off public services.

Having now finished the programme, the Design Council has summarised its findings in a report, highlighting the social enterprises that were engaged during the project, while also exploring how lessons learned might be used to inform decisions in the future. 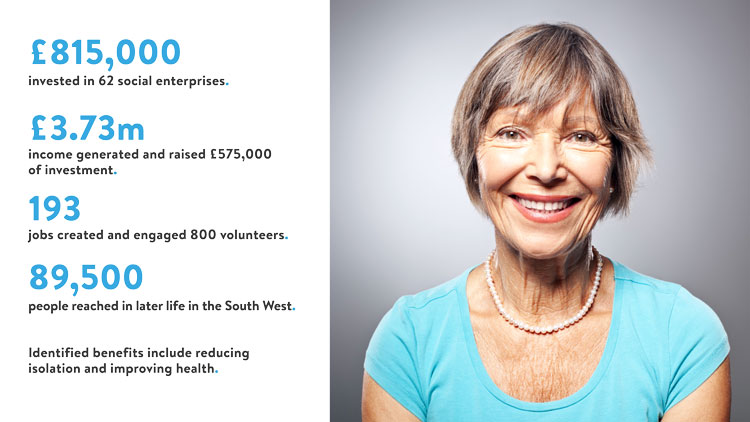 “We did workshops with around 150 people in the local area to better understand what their needs and aspirations were, and to find out what local assets existed,” says Drew. From here, the team set out six innovation briefs to create solutions to the findings – these briefs included considerations for transport, information, communities and carers.

In total, 62 social enterprises were supported over the course of the programme to develop products and services for people in later life, through grants totalling £815,000. Engaging more than 89,000 people in South West England, the report also says these enterprises generated £3.73 million.

The importance of co-production

One of the biggest findings from the programme, Drew says, was the importance of co-production. Of the 62 social enterprises engaged with, some 46% of them were led by people over the age of 50.

“This is really important,” says Drew. “Because it shows that it isn’t just one set of people who are pushing these initiatives, but actually it’s people in later life themselves who think they’re effective.”

Alongside creating 193 jobs and engaging 800 volunteers, Drew says the social enterprises had the deeper effect of encouraging a wider audience to rethink how they perceive older people in society.

According to the Office for National Statistics (ONS), some 47% of UK adults are over 50, so as the UK’s population continues to age, this reassessment is necessary.

“Individually, these enterprises were creating really nice products and services,” she says. “But collectively, they were also working to challenge our notion of employment in later life.

“People in later life can be part of the solution… and if these people are co-producing and delivering these solutions themselves, we can begin shifting the power over to give people the ability to take charge of their own ageing, rather than being dependent on the state.”

“A wider variety of outcomes”

Move It or Lose It is one such service mentioned in the report. Aiming to provide older people with activity classes, the initiative trains older people as instructors and supports them through The Exercise Network (TEN), an online platform for sharing training and learning resources.

Meanwhile Aquafolium was launched to bring people in later life back to nature via “forest bathing”, the practice of spending time in nature to counter illness and stress – thereby using the region’s already abundant green spaces in the process.

Elsewhere, the Personal Alarm Watch project saw the co-redesign of a traditional pendant alarm “to bring it into the 21st century”. Led by Ewan Marshall and Adi Kasliwal, the rethought product design was informed by the experience of older people, who felt the previous design which traditionally sits around the neck was “too stigmatised”.

These are just three examples, Drew says, of how moving the pressure off local authority public services can provide a “wider variety of outcomes”.

“A much bigger pool of organisations”

Moving forward, she says the Design Council “would love to do this kind of study again” and says a Transforming Ageing 2 could be seen in the future.

“We’ve learnt a lot from this programme, not least that actually people in later life want to be part of the process of developing and running solutions,” says Drew. “But what we’ve also learnt is that it isn’t just about social enterprises.

“In another run of this programme, we’d reach out to other providers, from supermarkets and local employers, to hotel chains and transport operators – there is a much bigger pool of organisations that could be involved in the design-led support of an ageing population.”