The consultancy, founded between London and Madrid at the same time, unveiled the branding which includes a wordmark, strategy guidelines and physical materials. It was developed in conjunction with HyperloopTT’s Great Lakes Feasibility Study, a report that explored the viability of transport routes in North America, between Chicago and Cleveland. 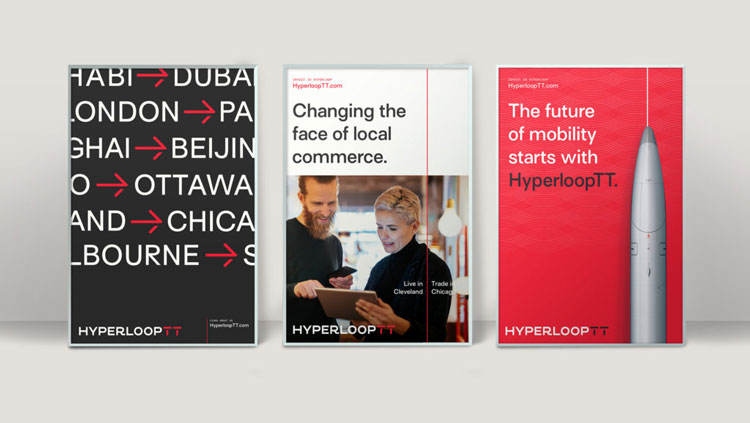 Hyperloop itself is not a brand but a technology — the equivalent of saying aeroplane or car. The system transports passengers in a capsule or pod, through a sealed tube or system of tubes. It travels free of air resistance, and therefore has the potential to be much faster than any other form of ground transportation.

It was developed in a collaboration between Tesla and SpaceX, and first published as an open source concept in 2013. Elon Musk, Tesla’s CEO and the founder of SpaceX, has encouraged engineering companies to develop the idea independent to his companies.

HyperloopTT is one of several companies in the race to create useable networks out of the technology.

Drew Coughlan, design director at Saffron, tells Design Week that there were two “clear lines of thinking” that needed to be delivered on.

The first is that HyperloopTT is at an “important juncture” in terms of the race for funding and being seen as a “credible solution for Hyperloop technology”. “There’s a need to clearly establish themselves in the current marketplace,’ he adds.

The second was to “signal to the industry that they’re changing”. Recent developments for HyperloopTT include recently patented technologies, contracts for governments where the system might be established and “credible” business cases, according to Coughlan.

With those two main principles, Coughlan says Saffron and HyperloopTT worked closely to convey a “human” element for the brand identity. “Yes, there’s a story about technology” he says. “But it’s got tangible human benefits.”

By reducing commuting times between two areas, the technology has the opportunity to “change how people live in cities”. It could be quicker to commute from Chicago to Cleveland — around 350 miles — by HyperloopTT than to commute between two places within Chicago by traditional transport, Coughlan points out. 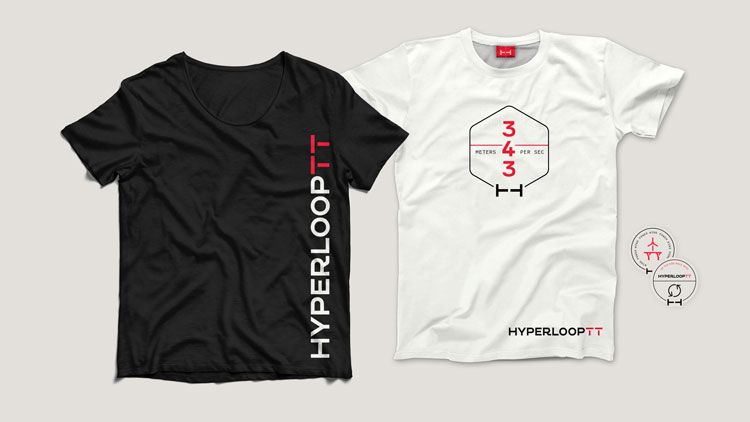 The main benefit from this, Saffron and HyperloopTT decided, is that passengers would have more time to spend time with their friends and family. This “altruistic” aspect was conveyed through the identity, starting from the symbol, Coughlan says. Comprising two Ts that have been turned on their side, and also resembling a widened H, the symbol represents how the “gap is being closed”.

The space, which Saffron is calling the ‘levitation gap’ is also a nod to how Hyperloop works. When the capsule gets up to a high speed, it creates a ‘levitation pump’ — a combination of the hovering mechanism and its vacuum effect — that enables the Hyperloop capsule to travel so quickly.

Playing into tropes — and moving beyond them

This focus differs from HyperloopTT’s rivals, who are intent on showing off the technological aspect in their hunt for funding, Coughlan says. The previous branding for HyperloopTT looked a little “Star Trek” and its main rival, Virgin Hyperloop One, looks “space age”.

Coughlan says the team looked at other transport brands, especially airplanes, and incorporated “tropes” such as a bold colour palette of red and black. “We played into those tropes, and went beyond them,” he adds. 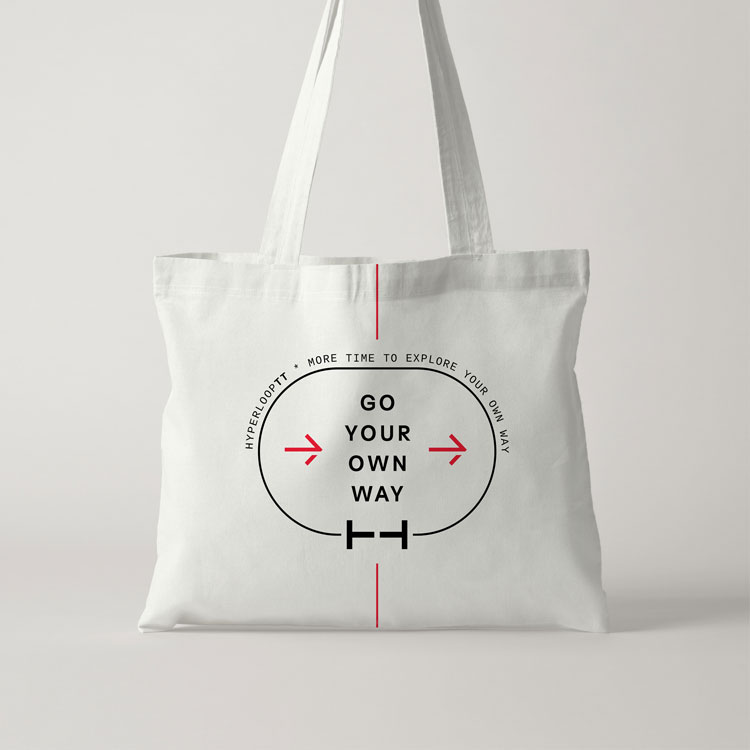 The “familiar” aesthetic — perhaps unexpected for such a futuristic company — was “incompletely intentional”, Coughlan says.

“I can imagine a person had to go on an aeroplane for the first time, you’d have been very scared of it,” the designer says. “There’s probably going to be that same type of anxiety for people using this technology — in a vacuumless tube, in a capsule going at almost 1200 km/h.”

The ambition for familiarity influences the aspects of the identity like the photography guidelines, which have two tiers. The first emphasises the human angle of the travel. The second features landscapes that might remind passengers of looking out a car or train window.

The actual Hyperloop capsule has no windows; passengers cannot see outside or where they are going. Instead Coughlan says HyperloopTT is exploring how to enhance the user experience to move beyond “point to point travel” by creating virtual meeting rooms in the capsules, for example. 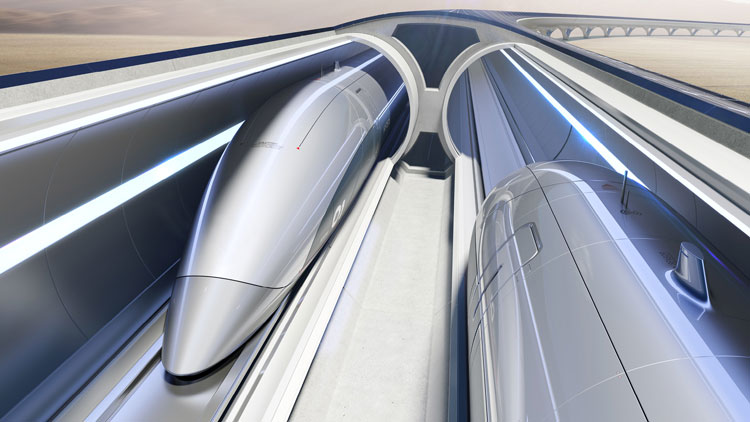 Included in the project are “travel badges”, T-shirts and tote bags with phrases such as ‘Go Your Own Way’. “The identity utilises tropes that you’d expect from travel but putting a very different interpretation on them,” Coughlan says.

While the branding aims to be “timeless”, the designer does cite the Futurists as an inspiration because of the ways in which the Italian artistic movement reinterpreted how cities could function. There’s also a Swiss modernist influence on the identity, which is borne out of the “frictionless” aspect of this technology, he says.

Saffron has provided HyperloopTT with “tools” so that it can create these brand materials, across physical and digital platforms. Saffron currently has no immediate plans to work further with the transport company.

The race to completion

HyperloopTT was the first incorporated company to develop the technology. The California-based company was founded in 2013, and currently employs around 800 people internationally.

In 2018 London-based transportation consultancy PriestmanGoode designed the interiors and exteriors of the HyperloopTT capsule. At the time, Paul Priestman, the consultancy’s chairman, told Design Week that the emphasis of the capsule’s look was on a “friendly” appearance.

HyperloopTT’s main rival is Virgin Hyperloop One, which was founded in 2014 as Hyperloop One. The company has an ‘innovation campus’ in Los Angeles and a machine and tooling shop in Las Vegas. In 2017, after an investment from Virgin’s founder Richard Branson, it was rebranded.

One half of Hyperloop’s developers, SpaceX runs an annual competition where it invites students to design prototypes for the Hyperloop pod. The competition — which has a tagline of ‘Break a pod!’ — is judged on one criteria: “maximum speed with successful deceleration. This year, the competition has changed and will be run on a longer test track (10km, rather than the previous years’ 1km). The track now also features a curve.

While Musk had previously stated that a top speed of potentially 1000km/h could be reached, the 2019 winning team (from the Technical University of Munich) broke the record at 463 km/h.

“Time is money”: Designing a daily visual reminder of the gender pay gap