“Monopoly money. The legal tender of the world’s most popular board game is a perfect piece of design. It’s clear, simple, colour-coded for ease of use and instantly recognisable, both as part of the brand and as what it represents: even if you’ve never played Monopoly, it’s still obviously a banknote. It also enhances the game experience: you can exact revenge on a callous landlord by paying the rent in ones, and what other currency lets you buy a hotel for cash?” 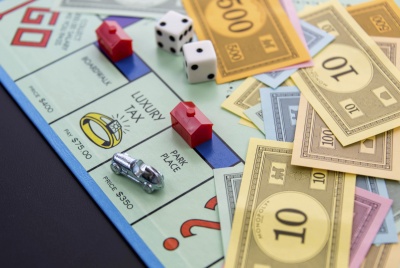 “Oh, please never let these things of beauty be overtaken by soul-less digital interactions! Trading bitcoins makes money as emotionally valueless as the billions whizzed about the ether by city traders. Banknotes and coins, like passports and stamps, bring a little joy into our lives. They’re glorious things of intricate, crafted beauty that reward close inspection. I’d like to see more designs taking the traditional methods and stretching the boundaries. Matt Dent’s done a great job of this with his coinage, which has elegantly drawn Britain’s loose change into the 21st century.”

“There will never be a greater icon in currency than the single dollar note. It is one of the greatest accidental brands of our time, a shortcut for what it means to be an American and the ever-present American dream. Culturally we’re bombarded with George Washington’s image; the almighty dollar is the dough of super-villains, a constant source of inspiration for artists, fodder for the latest snapchat filter, and the lining of your favourite rapper’s pocket. There is a reason we call cash ‘the green stuff’ and that all started with this simple note.” 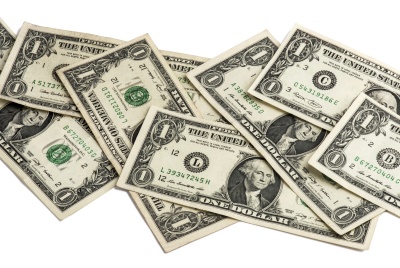 “Bear with me, because this is a bit of an odd one. My favourite ever currency design is the Drogna. This was the currency of choice in a BBC show called The Adventure Game, broadcast for 22 episodes between 1980 and 1986. Design Week’s more…mature readers (and I count myself among your number) may remember it.

The show featured a string of 80s ‘celebs’ stumbling through a series of fiendish puzzles in order to escape the planet Arg, where they were stranded. Still with me? It gets better. The show also featured Moira Stuart playing a dragon in human form, an Australian who only spoke backwards and a bad-tempered aspidistra plant called Uncle played by Kenny Baker.

The Drogna currency took the form of lovely big perspex discs printed with colourful graphic shapes: squares, hexagons and crosses. Its value was determined by multiplying the number of sides of the shape by the position of its colour in the rainbow. Try working that one out at the cashpoint.”

“My favourite currency would unquestionably be the Dutch range of banknotes created by Ootje Oxenaar, issued between 1966 and 2000. The perfect marriage of the engraver’s craft with a modernist aesthetic that the Dutch do best, the notes look as fresh today as when they were first designed. Taking some 30 years – from conception to circulation of the complete set – meant that this truly was a labour of love.

Being a great believer that a good job can become a great job with crafting, I was astounded to discover the lengths Ootje went to in designing the 10 guilder note, having engraved the illustration of Frans Hals himself. His human touch was also evidenced quite literally in the 1000 guilder note – being very poorly paid for the project, Ootje discreetly ‘hid’ a fingerprint in the curls of Baruch D’Espinoza’s hair, who featured on this particular note. He used his middle finger, making his feelings felt.

I reckon having any one of these gems grace your wallet would be a serious deterrent from spending.” 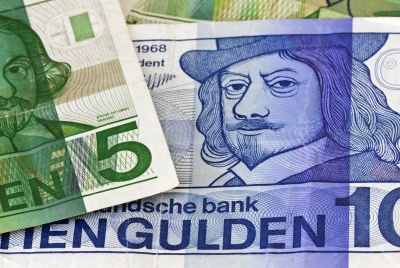