Because of a meticulous study of form and detail of his toy collection, Tom Karen says he could identify 12 different makes of car by the age of two.

Even today aged 94, his impressive memory and dedication to detail means he can recall and draw the beloved die-cast Water Line model warships of his youth. The models were the only toys he was permitted to bring with him as his family fled Nazi-occupied Czechoslovakia in the run up to the Second World War. Karen’s family fled the country five days before his 13th birthday.

After a design career spanning decades, Karen has reflected on his life in his new memoir, Toymaker.

The 400-page retrospective tells the tale of the designer’s life through objects. Each one has been curated to represent a period in his life, ranging from his iconic inventions like the Marble Run and Raleigh Chopper to more personal tokens, like a hand drawn map of the Hertfordshire village of Ashwell and the aforementioned warship toys. The collection altogether shows, he says, how “things” can come to define who we are.

“I can always sense when objects have been created with love”

Toymaker’s narrative begins not in Czechoslovakia, but in the Karen’s house now in Cambridge. It is the kind of home you’d hope a toymaker lived in. A pair of wooden seals, a broom-borne witch, birds, an angel and handwritten notes – and that’s just the view from the street. Inside is an “Aladdin’s cave”, he says, filled with “models, pictures, toys, things”.

This first glimpse invites readers into Karen’s world and gives an idea of the importance he places on objects. Design Week asks him about his love of “things”.

“I can always sense when objects have been created with love and talent, to be caressed and even to make you smile,” he says. “Pleasing objects are what I live for,” he writes in Toymaker. 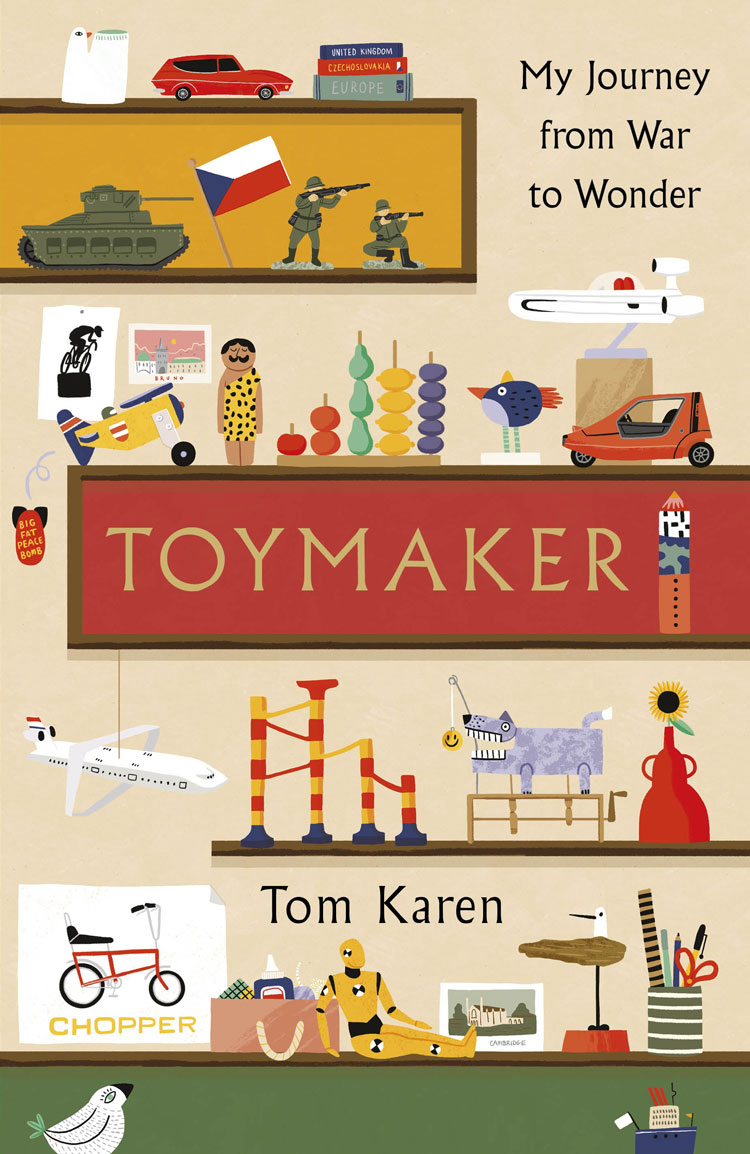 “I needed to create”

As the book goes on, Karen revisits his life during the tumultuous build up to the Second World War. For fear of being persecuted, his Jewish family left their home in Brno, Czechoslovakia for Prague, before moving to Brussels, Belgium then Nice, France and finally settling in the UK in 1942.

The whole journey took years, he recalls, with an extended period in France characterised by rationing and fear of the encroaching Nazi front. In the UK, Karen studied aircraft engineering at Loughborough University. Aircraft design was a “hot topic” at the time; the war had made sure aeronautical engineers were in demand.

But while there’s an echo of it to be seen in his home décor today – Karen says “you can’t spend long in my house without realising that it is full of flying objects” – it was a vocation he never quite got on with. After graduating, so began “the most barren years of my life”, he writes in Toymaker.

He elaborates for Design Week: “I was a useless stressman in my first job,” which he says involved calculating the robustness of aircraft structures. Towards the end of his first job, Karen began studying art and design in evening classes at a local adult education college. The practice reacquainted the designer with a side of himself he had long forgotten.

“My instincts were creative, I needed to create,” he writes.

Karen’s next role saw him become a technical illustrator. He had always been able to draw, he tells Design Week. Years passed.

“I was nearly 30 before I realised I needed to be an industrial designer,” he says. “A short spell at the Central School [now Central Saint Martins] led me to Ford and my career took off.”

At Ford, Karen would draw and design intricate, but ultimately tiny parts for cars. A shelf for a glovebox, or a badge for the bonnet, for example. In 1958, however, the annual design competition held by the Institute of British Carriage and Automobile Manufacturers (IBCAM) caught his attention.

Karen had, for months leading up to the competition, been working on his own vehicle which he called the Vimp. His entry into the IBCAM design competition drew upon this initial idea, featuring a rear-mounted engine, partly transparent roof, deep windscreen and no doors. It won him the competition.

“Pleased to be a pre-computer designer”

After Ford, Karen held roles at Phillips and Hotpoint designing white goods, winning praise and prizes in the process. The job he perhaps most revered for, however, is heading up Ogle Design consultancy from 1962 to 1999. Here, he worked on some of his most prized projects, and crucially, got into the toymaking business.

Coming from a background developing everything from cars to washing machines and radios gave him a sense of designing for performance, he says.

“Every product has to perform – it must be a pleasure to look at and to use,” he says. “It has to be an effective use of materials and I always looked for ways to make things better than the competition.”

With his meticulous attention to detail, Karen says he is “pleased to be a pre-computer designer”. One of the sections of his book is dedicated to the French curves – what he labels as the “curved equivalent of a ruler”. He created and used countless French curves throughout his decades-long career, he says, and some survive in his tool collection to this day.

Karen made plenty of “grown-up toys” during his time at Ogle. The Bush TR130 Radio, the Bond Bug and the Reliant Scimitar all came into the world because of him and his team.

The Bond Bug – a two-seater, three-wheeled vehicle designed for Reliant in the early 1970s – in particular was a “dream come true”. Incidentally, its unusual chassis formed the base of Luke Skywalker’s landspeeder in the 1977 Star Wars film. Karen oversaw the design and production of the fictional vehicle.

Beyond the Bond Bug though, it’s his toys that Karen holds most dearly. The Marble Run, sold to Kidicraft in 1970, was a particular highlight for Karen. In a 2014 interview with Design Week, he says the toy was still giving him huge satisfaction decades on, because of its continued enjoyment by children.

“In its own peculiar way, it was a very pure kind of design”

His other landmark toy was the Raleigh Chopper, but he explains in Toymaker that this design has had some of its joy “drained” because of a dispute over its origins. Alan Oakley, then-chief of design for Raleigh, maintained until his death that it was he who had designed the bicycle. It is Karen and Ogle, however, who were eventually credited with the invention by the Design Council.

Still, the designer talks fondly over his creation in Toymaker: “I suppose part of its magic comes from the fact that, in its own peculiar way, it was a very pure kind of design. Its key features didn’t arise from function: the basic concept of a bicycle is almost beyond improvement, functionally.

“Instead, it was all about perception. The design is a purely aesthetic attempt to influence the way the user feels about the product,” he writes. Indeed, he says it is the product that visitors to his home most want to interact with and get a picture of, to this day.

“My instinct is to create, not to cull”

Nowadays, some 20 years after his formal retirement, Karen is still as interested in design as ever. As he explains in Toymaker, he refuses to throw out the many souvenirs collected from his life in design. As a result, his house is home to binders full of newspaper cuttings, boxes of “obscure correspondence”, old diaries and sketchbooks.

“My instinct is to create, not to cull,” he says. In any case, Karen says “throw away materials” often make the best building components. “Since my retirement, I have run a lot of workshops for children, mostly making things from ‘throw away materials’ – their creativity and enthusiasm is a pleasure to watch.”

Indeed, observing the playing habits of children is the foremost piece of advice Karen wishes to give the next generation of toymakers.

“[You have to] work closely with children, build prototypes and observe how they are used,” he says. “I suspect a lot of toys go into productions without such testing.”

“A lot of poorly designed toys on the market”

Karen is still designing now. Mostly, it’s playthings for his grandchildren. Design Week asks him what he thinks makes for the optimal children’s toy.

“Drawing materials are hard to beat, and toys and games that provide a challenge and a reward are best,” he says, adding that his Marble Run is a good example of this. But toys have come some way since Karen was last at Ogle. Electronic gadgets are the plaything of choice for many children today.

“There is no escape from electronic gadgets,” he says. “This isn’t all bad, unless it is at the exclusion of the best traditional toys.” The problem is often that electronic toys are designed to be discarded and replaced.

This explains, Karen continues, why there appear to be “a lot of poorly designed toys on the market”. That, and the fact toymakers often don’t understand their market.

“I failed to persuade Matchbox and Airfix that they ignored girls,” he recalls. “The former went bust and the latter turned their attention to a collector’s market.”

All this said, Karen has one final ask of today’s toymakers: “Please let’s have more wooden toys.”

Toymaker is published by Blink Publishing, and is out 12 November. It can be purchased here. 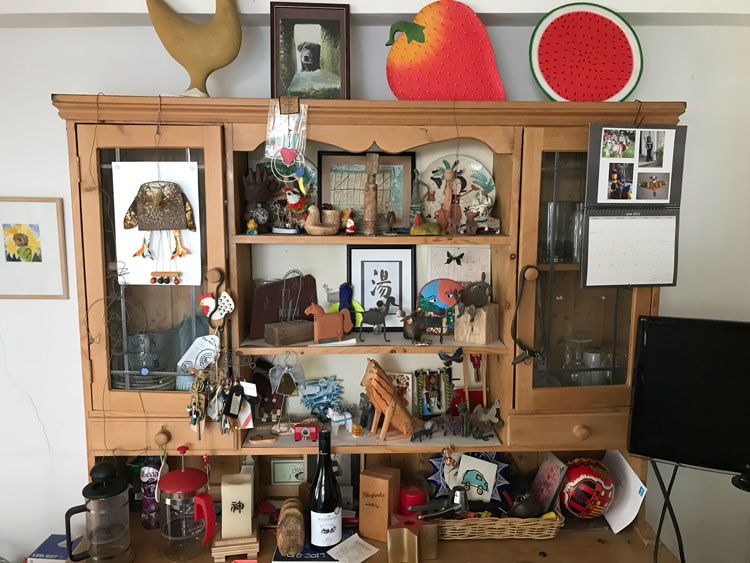 Picks of the month: the best design events of November