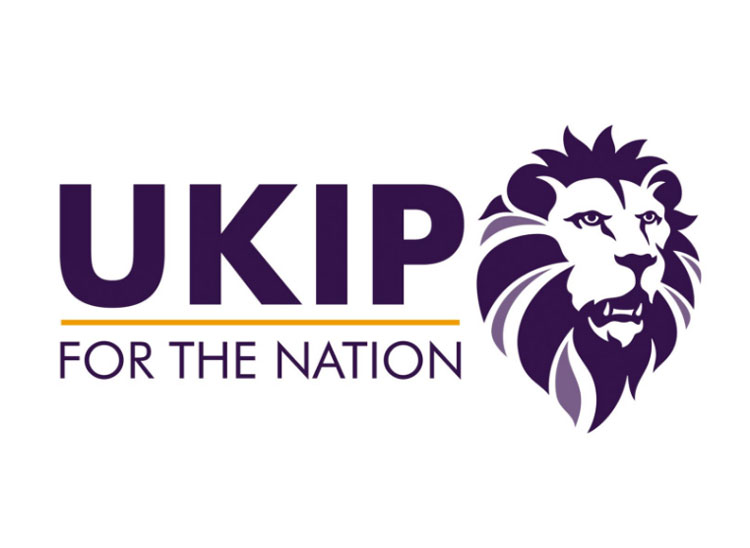 The UK Independence Party (UKIP) has undergone a rebrand, revealing a new logo and tagline as part of its annual conference.

Party members at the conference, which took place last weekend in Torquay, Devon were asked to choose between two designs for the new logo.

Both of the logos ditch UKIP’s well-known pound symbol, and incorporate the party’s new tagline “For the Nation”.

One of the logos sees two curved, three-sided, geometric shapes set in the party’s trademark bright purple and yellow colours, while the other one sees a lion’s head symbol set in a more muted, darker purple.

The lion logo was chosen as the winning design by conference attendees, but has come under fire for its alleged resemblance to the Premier League’s logo, which also depicts a lion’s head, reports The Telegraph.

Speaking to the newspaper, a UKIP spokesperson says the design “is not a rip off” and the party has “checked” that it does not infringe copyright, adding: “We’re not that stupid”.

The paper reports that the Premier League is understood to be consulting its legal team about the UKIP logo, but the organisation has declined to comment.

UKIP first announced it was undergoing a rebrand back in March, when former leader and MEP for North West England Paul Nuttall said the party’s branding needed “modernising” as the UK enters the “post-Brexit age”.

UKIP’s new identity has now rolled out across touchpoints including its website. The party has not named the designer.

“The comparison with the new (and far superior) Premier League marque is obvious, but perhaps inevitable. UKIP was looking for something to symbolise stoic and proud Britishness, and party members opted for an animal synonymous with…er…Africa? However, unlike the Premier League lion, which in its well-crafted simplicity manages to look brave, positive and strong, the UKIP big cat is slack-jawed, sad-eyed and vacant, which says it all.”

“People’s critiques on social media make all the obvious comparisons to the Premier League logo with wit. But what I find more misleading is that a logo and supporting visual identity should be an outward sign of an organisation’s inner soul. “Flossy”, or whatever the lion is called, clearly borrows from the Premier League logo, royal family and government crests, which all depict lions. All three organisations have values wholly unlike UKIP’s. And then there’s something sad behind those eyes that’s actually disturbing. It feels like a lazy attempt at changing what they want us to think they stand for. I can’t decide whether this latest chapter is tragedy, torture or just a farce. Bring back the pound sign – at least it was more honest.”

Elephant magazine redesigns to break out of “contemporary art bubble”