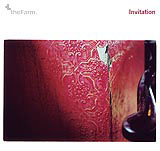 We’re not saying The Farm are alcoholics lock, stock and a well-worn clichÃ©, but the East End guys and gels clearly have a thing about watering holes.

To celebrate this feat, they are recreating the atmosphere of the pub, formerly The Prince of Wales, for one night only, with photographs of pubs in the area, interviews with local drinkers and, blimey guv’nor, scenes from ‘cult East End film’ The Firm starring Gary Oldman, shot in the building in 1988.

All ta-gever naaw, ‘Show me the way to go home’

Ted Muehling teams up with Salviati