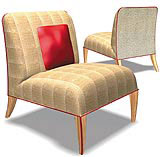 The collections, called Wing and Classic, are launching at the Verona Furniture Fair in October and will form the core feature of the Fendi stand, according to a Mark Humphrey spokeswoman.

The Wing collection will feature six pieces, including a day bed, an ottoman and a dining chair, says the spokesman. The Classic collection features five items.

Humphrey claims to have been snapped up by Fendi on the strength of his own-brand furniture collections shown in London.

‘The Wing and Classic collections combine classical English elegance with fluid, modern curves, and will give Fendi Casa’s usual range a new twist,’ he says.

Meanwhile, Fendi is refurbishing its store in London’s Chelsea Harbour, with all interior design work undertaken in-house in Italy. It is also looking to open a standalone Casa store in London, says the Mark Humphrey spokeswoman.

Bennett interiors for Swiss Re HQ