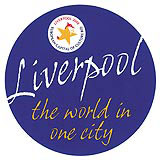 October has created the strapline ‘The World in One City’ for Liverpool, to strengthen the city’s bid to become European Capital of Culture in 2008. It follows the creation of a brand identity for the bid in March by StudioTitanium.

The strapline will provide the context for key projects planned by the Liverpool Culture Company running up to 2008 and it is hoped the line will be adopted by business and arts organisations.

The logo and strapline will be published this week on public information leaflets.

IBM freewheels with its Artificial Passenger

New DBA chairman has a tough job ahead of him