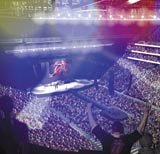 The design world may have chosen to quietly forget about the Millennium Dome, but it has been given another chance to prove its worth. The ill-fated dome is about to be resurrected with a new future and a new name, in a two-year project that affords significant opportunities for designers. Here, perhaps, is a chance to show that with clearer vision and tighter creative direction, design has the power to wow.

The dome’s revamp is being undertaken by a string of architects and designers working for US developer Anschutz Entertainment Group and mobile phone network O2, which are collaborating on the £500m development scheme.

In two years’ time, the dome will re-open as what AEG claims will be the biggest dedicated music venue in Europe. AEG apparently knows a thing or two about this: ‘We know it’s the biggest because we own the second biggest, which we’re building in Berlin,’ explains AEG Europe president and chief executive David Campbell.

The dome and the Berlin Arena will soon join the growing list of international venues developed by AEG for franchise, including the Staples Center in Los Angeles, The Toyota Training Center in California and perhaps most notably, three Nokia-backed venues for Los Angeles and Times Square: two Nokia Theatres and a Club Nokia.

Last week, O2 announced a £6m-per-year sponsorship deal with AEG that will see the dome site become the physical epicentre of the O2 brand, as it extends from its core network business to the realms of entertainment and leisure services.

In consultation with brand guardian Lambie-Nairn, O2 decided to rename the Greenwich venue as The O2, having toyed with the more oblique name The Bubble. The O2 will not only house a host of retail, restaurant and leisure facilities under the dome’s canvas, bearing O2 and non-O2-branding, but it will also offer O2 customers privileged access to tickets, mobile content and on-site entertainment.

The O2 experience will include a 23 000-seat arena for live gigs, an ice bar, a music room, an ice rink called the Ice Pad and other O2-related public and VIP bars such as the Blue Room (a twist on the green room). These have been developed with Lambie-Nairn, but the idea, as creative director Gary Holt explains, ‘is not about putting O2 logos on seats’, but rather creating quality events hosted by the brand. ‘We’ve been trying to make the entire project full of the brand, not just the brand identity,’ he says.

O2 UK head of brand Susie Moore says O2 has set up a creative round table to steer the initial design concepts for the venue. It consists of Lambie-Nairn, ad agency VCCP, HOK London, RTKL and Gensler, which are all involved in aspects of the site design.

O2 clearly needs to have a vested interest in all aspects of the dome’s redesign though, including monitoring the quality of nitty-gritty factors such as food outlets, toilets, baby-changing facilities and the other retail areas, since every aspect will come to reflect upon it as the main sponsor.

â€¢ Will host 150 live events per year, including exhibitions

â€¢ Can be used for sports events such as boxing, tennis and figure skating

Gulbenkian Prize for Museum of the Year