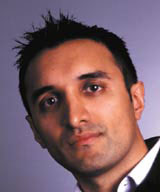 In 2001, Microsoft launched the Xbox gaming console, the world’s most powerful games machine at the time. It made an immediate impact. Outselling Sony’s PlayStation 2 in Christmas 2004, the Xbox has since carved out a strong position that continues to gain momentum. Couple that with the Xbox Live on-line service, giving millions of gamers the opportunity to challenge their friends and foes worldwide, and you have a system that has radically changed the way we think about video-games.

But even before the Xbox arrived, Microsoft had already started work on the next one. Designed as a platform to take gaming to the next level, Microsoft’s vision for its next console, the new Xbox 360 – code-named Xenon – was to transform the way people play.

The Xbox 360 user interface would open the door to this era of digital entertainment, so it had to be easy to use and attractive. In 2003, Microsoft invited eight design specialists from Europe, Japan and the US to make presentations and one group would become part of the Xenon team. AKQA’s track record across digital platforms gave us an advantage, as did experience of delivering solutions that support multiple languages and character-sets.

AKQA proposed that a product design philosophy should be applied to the interface for it to be an integrated, seamless part of the overall experience. Microsoft agreed and a team from AKQA was appointed.

Soon afterwards, Microsoft and AKQA formed a multidisciplinary team of user experience, interaction design, user insight and behaviour specialists. This dedicated team would be set up to remove the boundaries that might exist between clients and their agencies in order to create a more unique partnership of collaboration, openness and integrity.

In Xenon briefing sessions, Microsoft explained the features the new Xbox 360 would have and what would be required of the user interface. It would be designed to support high definition, wide-screen televisions. However, regardless of the screen it is plugged into, gamers would need to experience smooth, cinematic experiences that exceed anything they would have seen in games before.

In addition to being able to play DVDs, music CDs and view digital photographs, just about every MP3 player, digital camera and PC can plug into the Xbox 360 to stream music and photos. It will also provide access to digital TV and movies to any room in the house.

Gamers who connect their Xbox 360 to a broadband connection get instant access to a new version of Xbox Live, allowing players to compete with friends on-line, plus send and receive text, voice and video messages.

In addition they will be able to access the Xbox Live Marketplace where additional content can be downloaded. Gamers can create their own profiles, so players of similar skill levels can quickly and easily compete.

There will also be the opportunity to join sponsored tournaments to win prizes. Xbox 360 owners who add a specially designed camera to their system can add their faces into games and see friends while they play on-line.

The Xbox Guide Button was developed to become the launch pad that connects gamers to their games, friends and digital content, all from a wireless controller.

The interface for the new Xbox 360 was required to support all this functionality, ensure that these experiences were never more than a click away, as well as provide the flexibility to customise the interface and be modular enough for new features to be introduced over time.

Working from Seattle, San Francisco and London, the AKQA and Microsoft team built several functioning prototypes of the interface, working hand-in-hand with the industrial design team. In-depth testing followed, with immersive workshops, usability sessions and interviews with customers taking place worldwide. The prototypes were then refined and re-tested.

The core thought behind the interface is that accessing the functionality should not be a game in itself. Instead, it should be intelligent and provide innovations that make the experience intuitive, almost invisible and above all easy for anyone to navigate.

Right now, all over the world, as people leave school and work, the phrase, ‘See you on Xbox’ is becoming popular among friends. With the arrival of the Xbox 360 later this year, it’s going to become even more so.

Ajaz Ahmed is co-founder and chairman of AKQA

2005 – The joint team completes the interface design of the Xbox 360, scheduled to launch in the UK at the end of the year