Manchester International Festival, now set for its third instalment, is running a number of design-related initiatives alongside its wider programme of music, performance and art events.

The biennial festival was set up in 2007, and the last event in 2009 featured design-led content including a walk-through haunted house, developed by theatre design collective Punchdrunk, and a pyramid structure made of light, created by lighting designer Paul Normandale for band Antony and the Johnsons.

Irish artist Gerrard’s work full-title Infinite Freedom Exercise (near Abadan, Iran) will be played out on a sculptural LED wall installed in Lincoln Square. Gerrard has used 3D motion capture to create the figure of a soldier, who will stand in the foreground of the piece the background of which portrays a virtual version of the Iranian landscape near Abadan in the Persian Gulf.

Gerrard worked with choreographer Wayne McGregor to develop the motions for the figure in the work. The artist says the work draws parallels between notions of power and freedom and how these relate to energy supplies.

The Whitworth Gallery will be hosting 1395 Days Without Red, by Kamerić and Sala, which will run alongside Projections: Works from the Artangel Collection. 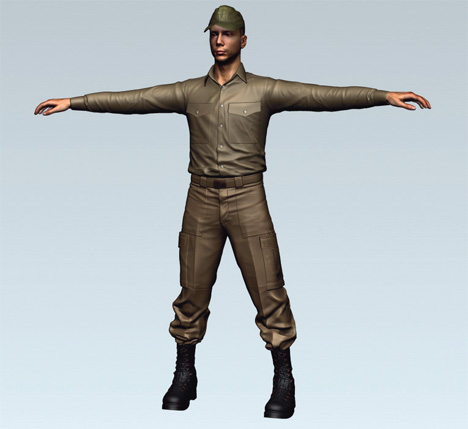 The work 1395 Days Without Red draws on the experience of the siege of Sarajevo during the Bosnian War for Independence the title refers to the fact that, during the siege, city residents were advised not to wear bright colours that might attract the attention of snipers.

The cinematic piece retraces the route of Snipers Alley in Sarajevo today, with the camera following a woman making her way through the city on foot. At every junction she must decide whether to walk or run, or whether to run on her own with others.

Works on show as part of the Artangel show will include Catherine Yass’s multi-screen installation High Wire and The Nightwatch, a 2004 work by Francis Alÿs, which tracks the wanderings of a fox through London’s National Portrait Gallery at night.

Sound Work Audio Obscura, by poet and novelist Lavinia Greenlaw, which is conceived as an aural version of a camera obscura, will be installed at Piccadilly station.

Using personal headsets while wandering through the station, listeners will hear fragments of monologues with the idea being that they can transpose the overheard voices on to people nearby and create their own narratives.

As a potentially more permanent installation, MIF will be working with Dickson Despommier to develop the UK’s first multi-storey vertical farm, which will be installed on the side of a disused tower block.

MIF says it will be working with a range of experts and local communities on the planning and development of the garden. Alex Poots, MIF director, says, ’The festival has a commitment to exploring urgent stories of our time and food production and security is one of the most crucial issues facing the world today.’