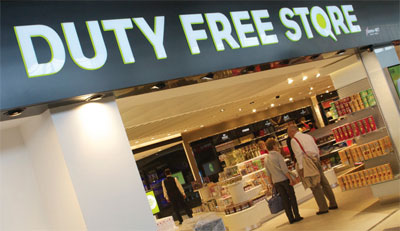 Design House has created a retail concept for airport retailer The Nuance Group’s Duty Free Store, which is set to roll out across Europe with a new identity system, and in-store tablets that feature shopping apps.

The consultancy was invited to pitch in October 2010 by the Swiss-based company and sought to design a basic concept to win the contract but was soon encouraged to develop a ’radical approach,’ according to Design House executive creative director Peter Dobie.

An identity forged in a custom Eagle font uses a green highlight which will distinguish the brand from its competitors, Design House says, with the ’o’ isolated as a graphic device, in some cases for pictograms, to delineate different types of products in store.’

A complex set of guidelines’ dictate in-store application, says Dobie, and there are boutique areas created as sub-brands for high-end products, including a Cigar Boutique and a Whisky Boutique which occupy designated areas of the store.

For perfume buying, a digital version of an industry standardised olfactory wheel has been developed which allows customers to make purchases based on, for example, ’fruity or citrus notes’, according to Dobie.

The app also makes links between perfumes and star signs, to help gift selection, says Dobie, who has used Android platform Motorola Zoom tablets instead of iPads, ’as it’s harder to block off functionality on iPads’.

One of Design House’s principal aims is to encourage the purchase or collection of items at customers’ destination airport. A new website has been designed to help facilitate this.

Launching in July, the new website will offer more content ’so as not to look like a cash and carry’, says Dobie, but instead offer flight, weather, car parking and car hire information in addition to goods.

Dobie says The Design Solution worked as 3D partner on the project.

Designers have a role to play in technology