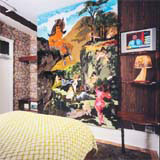 Two trend-setting hotels in Toronto put the city’s classic Victorian architecture to good use – they have kept their accessible, bohemian roots, while offering a quirky design. Unique, rather than boutique is the way forward, says Liz Farrelly.

For one of the world’s most cosmopolitan and diverse cities, Toronto has a surprisingly unpretentious attitude. Even in the designated Art and Design District, identified by fancy street signs and a concentration of galleries, boutiques, designer eateries and creative businesses, the atmosphere is more inclusive than elitist, as you can tell from afternoons people-watching on (well-heated) café terraces.

Based on the North American urban ‘block’ model, with long boulevards and narrow cross streets, much of the city centre’s 19th-century architecture is deliciously ornate and on an industrial scale. The fortunes of some neighbourhoods declined, so that many of those buildings were left mercifully alone. That profusion of building stock, ready and waiting to be renovated and reused, is what drew artists and savvy developers to the Art and Design District, located at the western end of Queen Street, or West Queen West to its friends. 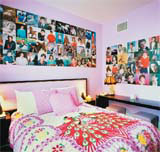 Before fashion came ready-made, Queen Street offered a concentration of drapers and haberdashers that dispatched salesmen to far-flung corners of the colony; hence its railway stations and the hotels built to accommodate both business travellers and citizens intent on enjoying nearby lakeside attractions.

Now, two such hotels have been radically, but sensitively renovated to provide very different, and complementary, dining, drinking and entertainment experiences. Welcome to The Drake and The Gladstone. Situated on consecutive corners of West Queen Street, these grand, but funky establishments provide a hub of services in a variety of spaces, including exhibition, performance and cinema venues, a yoga studio, short-term artists’ live/work apartments, an outdoor rooftop bar, a cosy café, swanky restaurant, sushi bar and a wide range of well-considered and ‘statement’ hotel rooms.

First to appear on the block, in 2003, The Drake is the more intimate of the two hotels. Originally opened in 1890 as Small’s Hotel, it was renamed in the late 1940s and extensively remodelled. By the late 1990s, it was a flophouse with an infamous punk/rave venue in the basement. Jeff Stober bought it in 2001, his aim being to create a home away from home for the community of artists, curators and patrons flocking to West Queen West. Stober, a committed ecologist, working with local consultancy 3rd Uncle Design, made it top priority to renovate the existing fabric, which includes Victorian terrazzo, mahogany wainscoting and a grand ‘moderne’ staircase and mural. Found objects, reupholstered sofas and surreal interventions (a chandelier made of old bike frames, a photo booth) are mixed with artistic interventions (vitrines, video screens embedded into walls).

Indeed, art is everywhere; there are artists in residence living in the hotel and its attached apartments, and for a week in November Toronto’s Alternative Art Fair moves in, and an entire floor of rooms is transformed into galleries. What anchors all this diversity, though, are the rooms, offering, as they do, oases of calm, thanks to good design and efficient sound-proofing. Clever pull-down and built-in furniture – think clean lines in ply – hark back to an era of luxury train travel. Meanwhile, glass-box bathrooms add a touch of glamour and the opportunity for exhibitionists to entertain their partners. Room service offers another grown-up attraction: ‘fun’ kits for lovers!’

Down the street, the more imposing Victorian Baroque architecture of The Gladstone, opened at Christmas, produces a hotel experience on a different scale, albeit one with similar aims to The Drake; its development manager Christine Zeidler’s mission statement is to ‘facilitate creativity’, and it too hosts the Toronto Alternative Art Fair.

The hotel is owned by the Zeidler family, with links to the Zeidler Partnership, developer of retail and leisure sites worldwide. Again, the best of the original fixtures have been retained, including a hand-cranked lift, stunning wooden floors and doors, and elegant high ceilings. With an entire floor of rooms permanently on loan to artists, and corridors wide enough to house exhibitions in their own right, The Gladstone is providing Toronto’s art scene with a substantial amount of new hanging space.

The private rooms have been handed over to a roll-call of local artists and designers, both established and edgy, the end results being permanent, functional, art installations. Ranging from romantic re-interpretations of Victoriana (Echame Flores by Rayne Baron) to surreal meditations on nature and the city (The Trading Post by Matthew Agostinis and Joel Harrison-Off), from rock ‘n’ roll glamour (Biker Room by Andrew Harwood) to kitsch vintage (Faux Naturelle by Allyson Mitchell), it’s best to choose your ‘site’ (and hence your experience) before you book.

With an award-winning weekly karaoke night held in The Gladstone’s Melody Bar and a full calendar of cultural events staged in both hotels, this corner of Toronto offers a cultural destination in a range of environments that live up to the hype. So forget boutique hotels; the most discerning travellers now want ‘unique’ hotels offering a dynamic mix of design, art and entertainment.