postmarks to commemorate this week’s official opening of the National Assembly for Wales buildings. 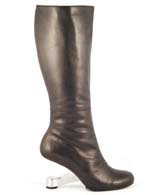 The Eamz boot is inspired by a chair leg created by Charles and Ray Eames and has been designed by Rem Koolhaas, nephew to the world-famous architect of the same name, under the United Nude brand. (pictured left)

Colemanbrandworx looks to expansion in the Middle East

Asda reviews roster as it expands across all formats