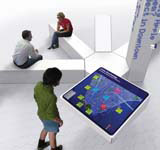 The public is slowly becoming accustomed to interactive signs, but perceptions have to change before services that respond to individual needs become commonplace, says John Stones

Mention interactive signs and most people will respond with a bewildered look. For most of us, the only time you encounter them is on the roads, as local authorities install signs flashing actual speeds at motorists, to surprise them into slowing down. But other signage is set to change as the reach of interaction design increases and new technologies become more reliable.

Despite the fact that the technology has been around for some time, there are very few genuinely interactive signs, other than perhaps a handful of touch screens in museums. ‘The technology is old hat, but designers haven’t cracked how to use it,’ says design management consultant Raymond Turner. ‘Interactivity has application in transportation in the broadest sense, whether at an airport or in a shopping mall, or wherever large amounts of people are moving around. There are terrific opportunities to make life easier for people.’

Alex Wood, of specialist consultancy Holmes Wood, includes new technologies as part of every wayfinding strategy she proposes to clients. ‘I think it is important that even if our ideas are rejected, they are considered and perhaps put on the “want list” for additional funding or future introduction,’ she explains. Of course, static signs are cheaper to install and maintain. And, if the budget isn’t there to update as the environment changes, users can be frustrated by ‘a wonderful piece of kit that actually gives them the wrong information’, as Wood has recently discovered.

There is an important distinction between truly interactive or simply dynamic signage, says Mike Wolff, group wayfinding manager at British Airports Authority. He finds little need for truly interactive signage – for instance, BAA trialled a message-posting system, but found it ‘very expensive and not very effective’. For Heathrow’s Terminal 5, BAA is currently working on ‘beacons’, which will provide dynamic information to travellers, as well as a departure board with a level of interactivity that is still to be decided.

Masamichi Udagawa of New York-based Antenna Design, which has recently completed three interactive signage projects, suggests the lack of interactive signs says something about the nature of signs itself – to put something out to the public in general. ‘Traditionally, signs are not designed to solicit input,’ he points out.

Neil Churcher, academic director at Interaction Design Institute Ivrea in Milan, believes we will see interactive signage arrive in two phases. The first, which we can already see emerging in airports and other transport hubs, allows for a broad level of interaction to take place. The second, more radical stage, will see signs or other public information points dispensing targeted, personalised information.

Udagawa has already produced two interactive signs for the New York subway. The first is a help point intercom, where the technological element is very small and the whole device had to be designed as a large sign, essentially to point to itself. The second is the Flexible Information and Notice Display, which interacts with the environment rather than the traveller, updating information as the subway carriage moves.

More ambitious, however, is the Civic Exchange, which won a competition for a public interactive installation for Lower Manhattan, and is now undergoing a feasibility study. Intended as a digital version of a bench under a tree, the installation provides an interactive map of the area, including events and news, operating as an open community platform as well as a wayfinding utility. It can also adopt an emergency mode to broadcast alerts to the surrounding area.

British Airways is believed to be working on an interactive wall for Terminal 5, possibly making use of radio frequency identification technology, which would ‘recognise’ passengers, targeting them with tailored information about their flight, and tracking their progress through the airport.

Another ambitious signage project is being created jointly by Digit London and All Of Us for The Public, the Will Alsop-designed public arts centre in the West Midlands. Mike Bennett, creative director at Digit London, says interactive signage is ideal for the museum environment, providing personalised information, ranging from where the toilet is to the location of a specific exhibit. At The Public, RFID allows installations ‘to relate to the user as an individual – as you go through the exhibition, the technology will detect your arrival and get specific information on you – for instance, from a jpeg taken when you arrived’.

This level of interaction is easier in the controlled environment of a museum, but outside, apart from the clear issues of privacy, there is the omnipresent danger that the digital media is co-opted for advertising. ‘If it’s about the supplier, that is when it will go wrong,’ says Churcher. And putting a value on interaction, unlike PR and advertising, is not yet standardised, points out Udagawa.

But Udagawa believe signs will be transformed by technology. ‘It will take some time for the people involved to see signs in a different way,’ he argues. ‘In the future, the cost of the technology will be less and less of an issue – as people involved in signage become more aware of interactivity.’ Perhaps it just needs a couple of large projects to put them on the map, as it were. l