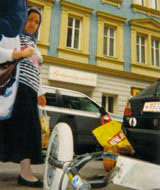 For legendary French photojournalist Henri Cartier-Bresson, the essence of his craft was, famously, to capture ‘the decisive moment’. For Austrian artist Martin Bruch, it’s about recording the inadvertent one.

Bruch has multiple sclerosis. Among its many unpredictable effects, the neurological disorder causes sufferers to lose control of their limbs and frequent falls are common. Since May 1996, Bruch has endeavoured to take a photograph after every one of his falls while he’s still lying on the ground.

He shoots in the direction he’s facing, with the small, one-way Kodak he always carries. When this proves impossible because of how or where he’s fallen, Bruch substitutes a black space for the missing photograph. A sound archivist by profession, he documents his work with methodical attention to detail. The time and place of each fall are noted. The result is an extraordinary collection of 312 images, amassed over five years and displayed chronologically in the exhibition Bruchlandungen (Crash Landings), which was part of the 2001 Venice Biennale and opens this week at Sadler’s Wells Theatre in London.

Born in 1961, Bruch became interested in photography as a teenager, but felt he had little to add to the canon. ‘I did not need to photograph anything because all the photos in the world already existed,’ he writes. The onset of multiple sclerosis inspired him. His ’emergency situations’ provided a subject, one he treats entirely unsentimentally. He produces street photography from pavement level with a bumper’s eye view of cars, pedestrians and shopfronts, where office buildings tilt at right-angles and friends smile down like inhabitants of a benignly Brobdignagian world. He also photographs the hidden corners of factories and apartments, lino floors stretching away mysteriously, doorframes like the spooky portals in a David Lynch movie.

Bruch regards Crash Landings as a work-in-progress, but using a wheelchair has reduced his number of falls. Before that, he got about on a big-wheeled kickboard. It’s often lying next to his legs in the foreground of a shot, as if in the aftermath of a skate stunt.

All the photographs have a stunned, yet exhilarating, quality, a tangible sense of being alive. That ‘Bruch’ can be translated as ‘crash’ in German suggests autobiography. And it is like portraiture in reverse. Bruch’s looking-upward conveys both an image of himself and a wider vulnerability – our existential unsteadiness, how physically fallible we all are.

It’s appropriate his first British show should be at Sadler’s Wells. A few doors down Rosebery Avenue is the London ’embassy’ of the Vienna-based Lomographic Society. Though Bruch doesn’t welcome association with devotees of the compact, Russian-made Lomo camera, he began his career using one and shares – if only by default of his condition – their unstudied, point-and-click approach.

Being snapshots, some images are more successful than others. But the strength of the concept is cumulative. Bruch’s interiors have the rawness of Richard Billingham’s family album, but without its narrative edge. Pictures taken outside, with heavy skies and sense of spontaneity, are somewhat reminiscent of Elaine Constantine, though lacking her fashionable sheen. Generally, however, comparisons seem unnecessary, even invidious, for such an original body of work. Bruch gets knocked, he gets up again. His vision is that of an undefeatable Everyman in love with life.