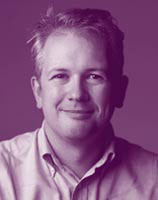 Egg is a dotcom success story. It has just posted its first full quarter of profits and is continuing to break new creative ground in a notoriously bland sector.

To reach Egg’s London offices, where chief marketing officer Nick Cross is based, you pass under the arch and cross the quadrangle of the former Prudential building – all wedding cake crenellations and terracotta spires. Once inside, you can watch the gadget guy from GQ magazine on the company’s own TV channel.

This contrast between ancient and modern is something Cross, a history graduate, surely appreciates. And Egg’s approach is as fresh as they come.

The latest batch of its TV commercials, created by Mother, sport a post-American Pie sense of humour: knowingly cheesy. The brand could be part of the entertainment industry. Cross, with his feet on his desk, seems comfortable with this idea.

‘Yes, we try to entertain people, but with a commercial message underneath,’ Cross explains. ‘Financial services is a low-involvement area. People don’t wake up every morning thinking, “God, I’ve got to find out about financial services”.’

But, he asserts, the mistake is to assume things that matter in retail and fast moving consumer goods marketing, like design, packaging and advertising, aren’t important to this sector. ‘It actually matters more because you have to find a way of bringing people in and engaging them,’ he says.

A former international planning director for ad agency Bartle Bogle Hegarty, Cross joined in May 2001 to develop Egg as a global consumer brand. He brought in Wolff Olins soon after to revamp Egg’s identity (DW 4 April), and plans to continue working with Radley Yeldar and Ideo on print and product innovation respectively.

He speaks lucidly, if sometimes rather laconically, about the importance of design. He takes time to think. But his insights come with quite a pedigree.

In 1996, while working on a Selfridges brand visioning project for Bartle Bogle Hegarty, he was handpicked by Selfridges boss Vittorio Radice to help transform the then struggling retailer’s fortunes.

The store’s image was down-at-heel and out-of-touch, but Radice wanted a fresh start. ‘Vittorio said, “come along and make it real, then”,’ Cross recalls. ‘It was a fantastic opportunity to turn round a brand that needed a makeover on every front.’

As marketing director, Cross was instrumental in Selfridges’ renaissance, which is now seen as an exemplary piece of brand repositioning with implications beyond its category. ‘Design communication was fundamental to changing perceptions of what Selfridges was all about. Changing the corporate identity at an early stage signalled intent before the rest of the store had undergone significant change,’ he says.

The designer Peter Saville advised Selfridges ‘in his capacity as an eminent guru’, says Cross. Some of Saville’s enthusiasm for in-house design appears to have rubbed off. ‘In-house teams are vital for any retail-type organisation,’ says Cross. ‘They give you that speed and flexibility that you find difficult to get working with [consultancies].’

Egg’s in-house team is led by head of design Damon Reynolds and head of internal agency Mia Sable. Saville is again playing the role of mentor and champion. But this doesn’t mean a downgrading of external designers.

In-house design meets the brand’s regular needs, while outside input can ‘raise the game and concentrate on pushing boundaries’, Cross maintains.

The brand’s creative-led approach is reaping rewards. Customer numbers for 2001 were up 44 per cent on the previous year, and Egg has overseas ambitions in mind: January’s acquisition of Zebank in France, for example, marks its first attempt to break out of its domestic shell.

But creative flights of fancy lift off with a keen understanding of the target audience. Cross knows the value of research from his time with brand strategist SRU, run by style pundit Peter York under his real name of Peter Wallis. ‘I spent years doing focus groups, maybe 200 a year,’ Cross remembers. ‘Not great for the social life, but a good grounding in what normal people think and do.’

‘Grounding’ is a favourite theme. Cross has a historian’s feel for the inherent forces that inform the big picture. However, market research should be used to scope and to test creative work, not influence it during development, he believes. ‘Otherwise, you end up confusing it and not pushing as hard as you could. [The creative] must be driven from a vision,’ he says.

‘The way a brand expresses itself in its day-to-day business through language and graphics is absolutely fundamental. It’s a really important grounding for doing anything. How can you grow quickly internationally if you haven’t got the basic graphic and tonal language to use?’

An advocate for design in a young and growing company, Cross clearly has plenty of ideas that are yet to hatch.

A financial brand needs more than just a makeover

A financial brand needs more than just a makeover