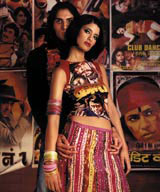 It is hard to imagine how to capture the flamboyance, drama, escapism and energy of Bollywood movies in a department store, but this month, Selfridges is going to have a pretty good go.

With the help of Bollywood’s most fÃªted set designer Nitin Desai, in-house teams in London and Manchester are transforming the stores into high camp Bollywood film sets.

‘It will be like nothing our customers have seen before – a joyful subversion of contemporary design values,’ says Selfridges chief executive Vittorio Radice. ‘We’re having fun in a world in which anything goes.’

Here we profile Desai and talk to Selfridges marketing director James Bidwell to discover the importance of design to Bollywood and how it is helping Selfridges bring a touch of Film City to the UK.