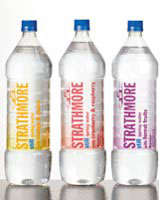 Water brand Strathmore will relaunch from this month with an identity and packaging redesigned by Parker Williams.

The work includes a new look for Strathmore’s still and sparkling water ranges and its range of five sparkling flavoured waters. A range of three still flavoured waters has been introduced, with bottles, packaging and identity also designed by Parker Williams.

‘It’s a massive overhaul,’ he says. ‘But the brand’s Scottish heritage was very important as far as consumers’ confidence in the source was concerned, which is why we were keen to keep it in the identity,’ he adds.

The consultancy was briefed to consolidate all the identities, make them contemporary and position them at a young, sporty generation, says Parker Williams creative director Tamara Williams.

‘We’ve moved the brand away from its traditional Highlands imagery and Celtic patterns, but kept the Glamis Castle imagery so as not to lose Strathmore’s Scottish heritage,’ she says.

A clear, ‘no label’ look has been developed to give the bottle a contemporary feel, says Williams.

Revamped bottle shapes have also been developed by Parker Williams for both sparkling and still water and a clear glass bottle with straight sides has been created for the on-trade glass range.

‘We have revolutionised the brand. Normally you stick within the bottle shape, but [Matthew Clark Brands] realised the shape could be used as one of the main brand equities. We also got rid of the paper label to create a fresh proposition,’ says Williams

The consultancy, which won the project without a pitch, has worked with Matthew Clark Brands for several years.