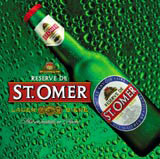 Wren & Rowe has designed the packaging and identity for French lager Reserve de St Omer, which launches in the UK and France from next week.

The consultancy commanded a five-figure fee for the work and was briefed to create a ‘confident-looking identity’ for the brand, which is part of the Brasserie de St Omer portfolio.

The work included name generation, but not bottle shape design.

‘We were asked to create something that felt contemporary, however, as this is a genuine Frenchbrewed lager, it also needed to be traditional,’ says Wren & Rowe managing director Paul Foulkes-Arellano.

The brand will be the brewery’s first foray into the 33cl long-neck bottle market. It will be packaged in ten-pack and 24-pack cartons.

‘The outer cartons are the main selling point, though there will be some point-of-sale material later on. It is much easier to create a design with standout on larger pack formats because of the surface area you get to work with,’ says Foulkes-Arellano.

Reserve de St Omer will be available at retailers including Safeway and Tesco.

The consultancy won the work through recommendation. It presented credentials, though there was no formal pitch, and was appointed in November last year.