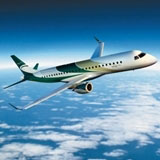 No amount of departure lounge luxury makes up for the misery of airports, prompting carriers to rethink the executive offering, says Scott Billings

Once a sumptuous, gravity-defying adventure in the clouds – replete with cocktails, fine china and sleeping berths – the experience of flying has undeniably dropped to earth with a bump. While American playwright Clare Boothe Luce described a 1941 Pan American Clipper journey as ‘the most romantic voyage of history’, it is hard to imagine any contemporary flight drawing such praise.

In fact, the experience, despite the best efforts of some airlines, is deteriorating. Plummeting fares result in impossibly squeezed margins at many airlines, and the corresponding surge in passenger numbers has created almost constant overcrowding at the major airports. At the same time, the corollary of increased flights is the fierce burning of air fuel at a time when carbon emissions are at the top of the environmental and political agenda.

This presents a challenge to business and executive carriers, which need to offer customers a higher level of comfort and service. Both British Airways and Virgin Atlantic are understood to be keen to offer a ‘seamless’ experience for top tier customers, ensconcing them in a branded, luxury environment from door to door.

With its exclusive tenure at Heathrow Airport’s Terminal 5, BA is close to achieving this, much to the chagrin of other airlines, according to industry sources. However, the creation of truly segmented airport zones is subject to negotiation with the airport operators – BAA in the case of the major UK airports – and these operators are reluctant to let potential shoppers skip past lucrative retail and leisure areas in airports.

‘At T5 they are doing a number of business lounges for differently paying customers and the passengers will be very segmented. But the problem for airlines is having to collaborate with airport owners to create a unique, tailored experience,’ says Oliver Salway, director at Softroom, which designed the lounge interiors for Virgin Atlantic’s Upper Class offer, relaunched last year (DW 25 August 2005).

Paul Priestman, director at Priestman Goode – which is working for BAA on product design at T5 – believes that airline control over the whole customer experience is going to be very important, but he says there is now a third option for business and executive fliers: chartering a private jet. According to Priestman, for larger business contingents the cost of hiring a jet can come close to the economics of scheduled flights.

‘What is the alternative for a business person? They can use the best airline, but they are still fed through the mêlée of airport problems which are only going to get worse. So there is a massive boom in these jets at the moment,’ he says.

Priestman Goode has been appointed by Brazilian aircraft manufacturer Embraer to design a suite of interiors for the ultra high-end executive jet Lineage 1000, a $40m (£21m) aircraft marketed particularly to the Middle East (see News, page 5).

Meanwhile, Silverjet, a low-cost, long-haul business class service launching in January 2007 is also hoping to appeal to customers who are weary of the big airport, big airline experience (see News, page 4). Its customer experience director Martyn Bridger spent 24 years at BA, latterly as head of in-flight service, and claims that passengers want to be removed from the ‘complex and difficult’ airport process. ‘Mostly airlines spend a fortune on lounge design to counteract the fact that if you’re stuck in an airport for two hours you hate it,’ he says.

Silverjet is building its own lounge at Luton Airport, with designs by Area Squared and Angela Harding, head of brand for the airline. Passengers will arrive just 30 minutes before take-off, rather than sitting around in the lounge for an hour. This means the company is concentrating its design efforts on the small fleet of Boeing 767 aircraft themselves, planes originally built to carry 300 passengers, but refitted to carry 100.

‘The cabins will be as unlike airlines as possible: not masculine, no red or navy blue corporate colours. The fabrics and finishes will be more like domestic interiors, or those in a private jet,’ says Bridger.

Although Silverjet’s service may appeal to fliers seeking an exclusive experience, Salway notes that its fleet of a handful of aircraft restricts schedule flexibility compared to the bigger airlines. 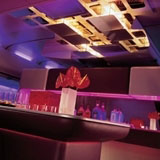 And BA lifts the wraps on its £100m relaunch of the Club World business class service in a couple of weeks’ time, revealing the fruits of design consultancies Tangerine, Davies & Baron and Winkreative (DW 23 March 2006). Although the lounges are being overhauled by Davies & Baron, it is understood that the focus will be on its redesigned flat-bad, which has been improved by Tangerine rather than totally redesigned, according to industry sources. The underlying processes and services are not expected to change significantly because it is ‘too difficult’, claims Brigder.

Whatever the offer, perhaps business customers are beginning to demand not spas and luxury bars in the business class lounge, but a service that fast-tracks them to the plane, where the on-board experience is closer to home than to a busy London bus in the sky.

COME FLY WITH ME:

• In 2005, 132 million UK passengers (57%) used one of the four London airports – Heathrow, Gatwick, Stansted and Luton – but regional usage is on the rise

Do it your way