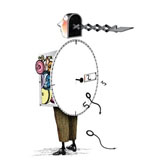 Many designers seem to be enthusiastic youngsters, but that doesn’t mean the industry is ageist. Other factors, such as a steep career pyramid and few senior positions, also play a part. But consultancies should still make sure that they understand employment laws, says Gina Lovett

While most designers are intensely passionate about their creative work, the same can hardly be said of their obligations in the realm of human resources. Although the Employment Equality (Age) Regulations came into effect on 1 October, the design community’s awareness of the pervasive new rules is far from paramount. While larger, more corporate consultancies have an HR function, with a team whose job it is to sift through the finer points of the staff handbook, smaller independent groups, with fewer resources, are facing a fresh set of challenges.

‘As about 90 per cent of design groups tend to be small and populated by the young, this legislation might be difficult to enforce,’ predicts Mike Dempsey of design consultancy CDT Design. Other industry players, like Jo Shaw of the Parliamentary Design Group, feel it is not in displaying ageism where the design industry falls down, but in professional practice generally.

‘As an industry, we find that the design sector lags behind others in understanding the need to engage with Government and Parliament’, she says. As a result, it may appear on the surface that the design industry is more ageist than other sectors in that it hasn’t engaged with the legislation.

The industry’s perception of creativity is a major factor in defining its attitude towards ageism, but views vary. ‘Designing is fundamentally a young person’s role. Fresh ideas always come from the next generation. Designers have to develop as managers, directors and mentors of this talent,’ says Bill Wallsgrove of Big Idea and Mildberry. On the other hand, Mary Lewis of Lewis Moberly sees creativity as disparate to age. ‘The issue of age is a distraction. Creativity defies most things and age is one of them,’ she says.

Debra Amini of recruitment consultancy Profiles Creative agrees with Lewis. ‘The perception might be that design is very youth-led, but, on the contrary, we’ve found clients are ultimately interested in the skill set a candidate can bring to an organisation,’ she says.

In design, however, attitude towards ageism has as much to do with expectations of career progression and salary structure as it does with the perception of creativity and youth. Most recruitment consultants agree that design does generally follow a typical career profile, with graduates starting out as a ‘junior’ in their early 20s, developing into a ‘senior’ designer by their early 30s, followed by a progression on to creative director by the time they reach 40. Towards the latter part of their career, there is a tendency for designers to veer towards management or to side-step into a related sector.

Kim Crawford of recruitment consultancy Periscope explains, ‘The pyramid in our industry is steep, so opportunities for senior people are limited.’ The resulting common pattern inevitably influences our perception of the ‘requirements’ of certain age groups. In addition, life stages come with a different set of circumstances and financial ‹ expectations, and there is a tendency for employers to confuse this with age. ‘Older, more experienced designers will, inevitably, expect higher rewards, and will have greater financial and family commitments,’ says Dorothy MacKenzie at Dragon International. Recruitment consultant Valerie Gascoyne of BDG Xchangeteam, however, points out that salary should not be based on the age/ experience model, but on the level of responsibility.

Deborah Dawton, chief executive of the Design Business Association, is keen to emphasise both points. ‘It’s important to focus on the responsibility, skills and requirements, not the age’, she says. She also points out that preconceptions of age are often confused with personality, attitude and the idea of ‘fitting into company culture’.

‘Design groups need to be very careful about how they describe themselves. Using the words “young” or “lively” could indirectly discriminate against an older person. Similarly, using “five years’ experience” on a job description could discourage younger applicants from applying for the role,’ she says.

Though recruiters and designers agree that talent should be the biggest discriminator, most are doubtful about how this can be implemented. Legal firm Humphries Kirk – an advisor to the DBA – warns that the implications of failing to implement the new rules are very real and serious. According to a spokeswoman for the firm, ‘Making a claim is straightforward. Practically, there will be huge commercial pressures on design employers to settle claims. To ensure that age discrimination is eliminated at work, employers need to review all their HR policy procedures.’ It doesn’t just apply to job ads.

Time to get that staff handbook out, then.

I’ve been working in design for 26 years and followed an unconventional career path from printmaker to lecturer, to art director, to designer. What opens doors to designers is creativity and this does not suddenly evaporate on their 40th birthday. There is always a place for people who believe you never stop learning.

As a young designer people often assume you have no knowledge or experience. It can be frustrating when each job you look at requires two or three years’ experience. I’ve had feedback from interviews when they say, ‘You are the best we’ve seen, but you don’t have enough experience’. You start to wonder where you’re meant to start. Surely someone with little experience can be an asset as they have not picked up bad habits and are open to outside influence?

Generally speaking, my heroes, who are a decade older than me, are still producing the goods – Derek Birdsall, David Gentleman, Michael Wolff and, sadly until recently, Alan Fletcher. All have a curiosity of spirit, which keeps their work alive.

I think that by their late 20s, deep down most designers know whether they have picked the right profession or not. Someone once said to me, ‘You learn in your 20s, you make your name in your 30s, you consolidate in your 40s.’ Interestingly, they never specified what happened after that.

Design businesses aren’t ‘ageist’, they’re ‘cost-ist’. In general, it’s true to say that younger people expect to be paid less than older people – decades of promotions and salary reviews can all add up to an expensive person. In a low-margin industry, that alone is one big reason why design businesses will always be biased towards youth. The situation can become self-perpetuating – if the culture is younger, then younger-minded people tend to win out. Only where there is evidence of remarkable talent do exceptions tend to be made.

Jim Prior, The Partners

I wouldn’t have an issue with keeping a designer on past 65. Think of how many brilliant, over-65 designers, artists and creatives there are. Many are working well into their 80s. For architects, life begins at 60. Again, it’s all about your capacity to challenge accepted ways of thinking. That’s the basis of creativity.