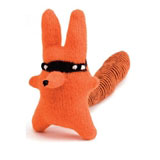 It’s that time of year again when TV ad breaks are given over to cavalcades of toys, toys and more toys, all looking cute and begging to be bought. With the aim of attracting some of that spending power in the direction of their designer/maker tenants, the Manchester Craft and Design Centre’s new exhibition space has been colonised by a crazy, motley crew of modern day soft toys, the sort of thing that grown-ups collect as well as cuddle.

The trend for all things cute may have been fed by Animé and the Japanese love of classic cartoon icons – such as Miffy and Snoopy – but, by contrast, this coterie of creatures celebrates individuality by way of a deliberate ‘handmade’ stance. While Tait & Style’s intricately knitted animals display their Orkney heritage via Fairisle patterning, Claire Montgomery’s ‘munkis’ are unapologetically lopsided; and while Lucy Griffith’s horseback-riding rag dolls are like modern-day characters in a Nordic fairy tale, Donna Wilson’s Creatures boast more bizarre, almost surreal biographies. With buttons, appliqué and patchwork, along with the current cult hobby of knitting, all present and correct, the hope is that visitors will be inspired to have a go too.

Maybe along with that unwritten novel, we’ve all got a handmade creature lurking in the depths of our imagination, just waiting to be freed…