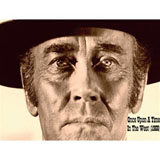 The first Spaghetti Western I watched was as a 12-year-old on a Thursday night in St Peters Secondary School, Derry. Liverpool also won a European cup that week.

My fascination was ignited that night and my interest in this film genre has continued to this day. No other film type has such complete artistic perfection, from direction, cinematography, soundtracks to title sequences.

Dubbed Spaghetti Westerns because they were mainly produced by Italian studios, they largely consist of intense violence, minimum dialogue – The Good, the Bad and the Ugly has none whatsoever for the first 15 minutes – dramatic panoramic wide-angle camera shots and unusual soundtracks that use weird instruments and sounds. 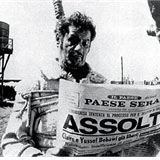 The works of Sergio Leone and his collaboration with Ennio Morricone are my favourites. From Once Upon a Time in the West to A Fistful of Dollars, these films captivate me from the beginning title sequences, which used experimental typography, to the cinematography and soundtracks.

All these elements seem to work perfectly together, creating a visual and acoustic experience that many current movies don’t come near.

Oh, the posters are rather good, too.