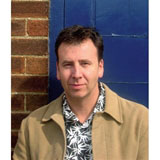 Loewy Group has acquired branding and communications consultancy Bite for £2m and has a number of larger takeovers in the pipeline.

According to Loewy chief executive Charlie Hoult, discussions are underway for the purchase of bigger companies in the branding, marketing and public relations sectors. The acquisitive marketing services group is aiming to achieve a turnover of £37m and a head count of 300 people during 2007.

The 20-strong Bite team will be relocated from its offices in London’s Clerkenwell to Loewy’s headquarters in Pimlico after Christmas. The Bite name will be dropped as it is integrated into the group.

‘We are intending to bring their team quite close together with ours, but they will continue to work directly with their existing clients. We don’t have a whole cross-selling plan,’ says Hoult.

Bite founders Keith Crook (pictured) and Rebekah Brown will become creative director and director of strategy respectively at Loewy. ‘We were at a point where we wanted to expand our business in some way and Loewy seemed to have something of a similar attitude and working philosophy to us,’ says Crook. ‘Loewy is an interesting model, because it is bigger than an integrated agency, but smaller than a WPP [-type holding company].’

According to Hoult, the acquisition will boost Loewy’s brand identity development and communications offer. Bite’s portfolio of clients includes Visa, Interoute and Journey Latin America. It is also global brand guardian for Volvo, overseeing the introduction of a redrawn logotype for the Ford-owned car manufacturer earlier this year (DW 9 March).

‘This deal is at the smaller end of what we’re planning to do. We are now looking for bigger ones, which will operate as more stand-alone businesses, with less integration,’ says Hoult. Bite’s most recent profits were around £250 000, he adds.

• Remains acquisitive, with further deals expected in the coming months