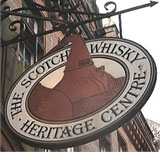 The Scotch Whisky Heritage Centre in Edinburgh is looking to appoint a design consultancy to redesign its main exhibition. This is part of an organisation-wide £2m overhaul which sees the launch of a fresh brand identity created by Nevis Design Consultants.

The revamp aims to reposition the centre to attract more tourists. It is being rebranded by Nevis as the Scotch Whisky Experience and the identity will be applied to the venue’s signage, wayfinding, packaging and marketing collateral. The venue is a showcase for the Scottish whisky industry and was launched in 1987 with the backing of 19 Scotch whisky companies.

The attraction is looking to redevelop its ‘visitor experience’ and will redesign the main exhibition and tour, according to Scotch Whisky Experience marketing and deputy manager Julie Trevisan-Hunter. A pitch may be held to appoint a design consultancy to the work, but the appointment process is yet to be decided by the board, she adds.

A design group will also be appointed to redesign the venue’s website, www.whisky-heritage.co.uk, which will relaunch in the first quarter of next year.

‘We want something more eye-catching and meaningful, with a more impactful identity. The branding did not reflect the essence of what was inside the centre,’ says Trevisan-Hunter.

The redesigned brand identity is based on venue restaurant Amber’s visual identity, also created by Nevis about 18 months ago.

The design includes a similar series of whisky-coloured droplets, which can be translated into 3D installations and sculptures that may be placed in the venue, says Stewart Spence, designer at Nevis.

The Edinburgh consultancy has been working on the rebranding project since June.

‘The old logo was fairly stuffy and old fashioned. We wanted the identity to not look like a traditional museum, but reflect the modernisation of the visitor experience, to entice more visitors and really grab an audience,’ says Spence. Architect Norman Gray & Partners has redesigned the main entrance of the centre to include a glass facade and LED-lit widows. This £400 000 project was completed in June this year.

In addition to the restaurant and permanent exhibition, the centre houses a whisky bar stocking more than 270 whiskies and a retail outlet, but does not actually produce any whisky. It also runs the Scotch Whisky Appreciation Society and the Scotch Whisky Training School, and offers conference facilities to businesses. The centre’s managing director is Alastair McIntosh.

• Consultancy to be appointed to redesign exhibition and tour

Favourite old brands are already in a museum