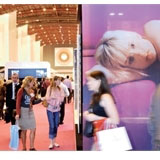 A question mark looms over Ian Rudge’s position as brand director at 100% Design, as 100% East founder Jimmy MacDonald breaks away from event owner Reed Exhibitions to launch a start-up venture with Rudge.

Industry sources suggest that his role will evolve following the launch of the new venture. However, a spokeswoman for 100% Design says Rudge will continue in his capacity as a consultant to Reed.

In recent years, Rudge has taken the 100% Design brand global, launching 100% shows in Moscow and Tokyo.

It emerged last week that 100% Design creative director Tim Pyne has quit the organisation and that a replacement show designer for London will be announced by the end of the year (DW 26 October).

It is understood that the 100% East brand will be axed in light of the new design fair which MacDonald and Rudge will be running in the same East London Truman Brewery location next year. The spokeswoman confirms that Rudge and MacDonald are ‘currently working on a series of plans to develop complementary events of their own’.

The fair, which MacDonald stresses will be independent of Reed, despite the company’s indications to the contrary, will now take up the entire Truman Brewery site and comprise a series of events in the different spaces.

The intention is to involve a more varied mix of creative industries, such as the fashion and technology sectors, and move the show beyond the typical product and furniture focus of 100% East. ‘We don’t want stand upon stand of products and furniture. We want to broaden the scope of people involved in our show and involve more disciplines. There is a huge potential that has not yet been realised,’ says MacDonald.

Investors for the fair have been secured, although MacDonald declines to reveal further details, such as the show’s name, at this stage.

100% East launched in 2005. The organisers adopted an alternative format last year to reinvent it as an ‘incubator’ show for young talent and integrate a more multi-disciplinary approach (DW 11 May).