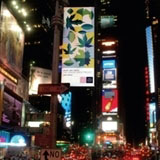 Installing large-scale banners – by well-known, international designers – across 33 blocks in New York to promote Green issues could have been a logistical nightmare. Luckily, Alice Twemlow was on hand to ensure it all went smoothly, says Liz Farrelly

Greening one of the planet’s most densely urban environments, amid illuminated advertising and a sea of chain store facia, is The Urban Forest Project. Surprisingly, New York’s Times Square has just sprouted lots of trees.

Original artwork, commissioned from an international checklist of graphic design’s great and good, alongside up-and-coming talent, has been transformed into large-scale, street-light banners decorating 33 blocks in the heart of Manhattan – up town from 41st to 52nd Street and cross-town from Ninth to Sixth Avenues.

Using the metaphor of ‘tree’, issues of sustainability and deforestation have been given centre stage at what has been called the Crossroads of the World, in an effort to offer something other than the Disney Store and CNN’s ticker-tape. 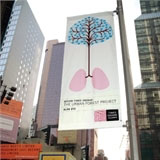 With a remit to ‘improve and promote’ the area as an icon of the culture and entertainment industries, the Times Square Alliance asked the New York Chapter of the American Institute of Graphic Arts to art direct all 185, 0.9m-by-2.7m street-light banners within its territory. In the US, graphic designers take their professional status ‹ very seriously, so much so that the AIGA is the country’s largest design organisation, with headquarters in an office-cum-gallery on Manhattan’s Fifth Avenue.

Alice Twemlow, one-time programme director of the national office and now a board member of the New York Chapter, had all the requisite experience to stage such a high-profile design intervention, and was asked to curate and co-ordinate the project. She is now an independent writer, curator, events and conference organiser, talent scout and ideas woman, trading under the quirky company name of The Desk of Alice Twemlow, and the project needed both her vast knowledge of design talent and her experience of juggling logistical nightmares.

Twemlow graduated from London’s Royal College of Art/Victoria & Albert Museum History of Design MA in 1996, knowing she wasn’t a ‘museum person’. ‘Writing and research is at the core of everything I do,’ she explains. That includes her book, What is Graphic Design For? (RotoVision), which looks at how designers interact with major issues, such as technology, ethics and globalisation. 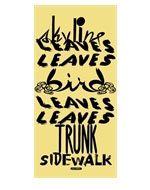 During her four years at the AIGA, Twemlow staged eight issues-based conferences, the last and most ambitious of which was the 2002 National Design Conference, Voice. For that, she managed a production team of 100 creatives and technicians, and briefed 120 speakers. On the creative side, she commissioned another British expat, illustrator and zinster, Peter Arkell, to adapt his wobbly line-drawing for the conference’s posters, leaflets and identity.

Three years later, Twemlow worked with Arkell again, this time at a conference in Boston. The Laboratory for Extreme Experimentation was an alternative debating chamber, clad in chalk-covered blackboards and illuminated by fluorescent light, which was redrawn by Arkell on a daily basis. Organised by Desk Space, a subsidiary that Twemlow runs with her husband, writer David Womack, they set out to redefine their client, Adobe’s conference presence.

Twemlow keeps her talent-spotting antenna trained by producing annual round-ups of graduating designers for American publications. Those are fed by her contact with students at Yale University, Parsons School of Design and Rhode Island School of Design, where she’s a guest lecturer. Her next major teaching role, however, is to set up a new Masters of Fine Arts in Design Criticism at New York’s School of Visual Arts – a course that is new to the US.

‘I’d been teaching Critical Thinking to the design students at the School of Visual Arts when Steve Heller asked me, “Do you want to be chairman of a new course?”‘ recalls Twemlow, brimming with enthusiasm. The first intake of students is planned for 2008 and building work is already underway at the Fifth Avenue ‘campus’. 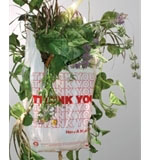 Design Criticism will differ from current Design History courses (which aim to churn out museum-oriented people) in that it will offer practical, media-based workshops, so that graduating students will feel equally at home broadcasting radio shows, copy-editing blogs and staging exhibitions. With logistics being a crucial part of cultural production and design in need of qualified professionals, Twemlow’s next big challenge could end up benefitting many more design professionals than those who sign up for her classes, just as The Urban Forest Project is helping to promote Greenness more widely.