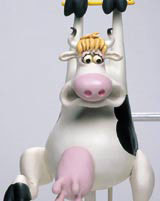 Nick Park won the first of three Oscars in 1990 with Creature Comforts, an exquisite five-minute animation in which vox pop interviews on mundane subjects such as housing, friendship and keeping warm in winter were related by a bizarre menagerie of plasticine animals.

Now, after a gap of 13 years, Creature Comforts has been revived and expanded as a 13-part TV series, directed not by Park, but by his longtime colleague at the Bristol-based Aardman Studios, Richard Golieszowski, more familiarly known in the animation world as Golly.

When he embarked on the project 18 months ago, Golly had just suffered the indignity of having the plug pulled on his animation feature debut, The Tortoise and the Hare, which was to have been the follow-up to the hugely successful Chicken Run. Apparently, the script wasn’t right when the movie went into production and, as Park put it, ‘we simply didn’t feel it was funny enough.’

If it had been Hollywood, Golly might have paid the ultimate price for its failure, but the sensible and sensitive folk of Aardman simply moved him on to another project, Creature Comforts – the Series.

Park’s best work has been so personal to him that it is hard to imagine how he can hand it over to someone else. He says he wanted Golly to do it because they shared the same values and the same sense of humour.

A whole new menagerie has been created by Golly and his team to fit the 150 different voices selected from 300 interviews that were conducted all over the UK, ensuring a broad spectrum of accents, ages and social types. The interviewers explained what it was for, and that they would become plasticine animals if their voice was used.

One of the joys of the original Creature Comforts is what’s going on behind whichever animal happens to be ‘on camera.’ Two exotic birds start a beak-pulling contest; a tortoise clambers into a giant hamster’s wheel; a baby rhino does a poo.

There is similar attention to detail in the new series. While Ivana the lion is holding forth, the interviewer’s microphone is just visible on the side of the frame, along with a trembling chair being held up with his other hand to keep the beast at bay; a long-winded greyhound repeatedly bolts out of his trap in mid-sentence.

Amid all the computer- generated slickness and Americanisation of today’s television cartoons, Creature Comforts looks quaintly English and slightly out of place. But that’s a plus as far as the people at Aardman are concerned. ‘I felt we got a bit too slick with Chicken Run,’ explains Nick Park, ‘I like seeing fingerprints on the plasticine, it has a charm and character people can relate to, that handmade look. There is no point in us trying to compete with computer-generated animation.’

While Park prepares to start shooting the first full-length feature starring Wallace and Gromit, Golly is developing another television spin-off, this time involving a character from Park’s Oscar-winning A Close Shave – the jumper-wearing sheep called Sean.