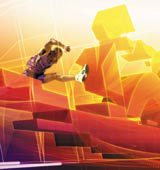 The broadcast specialist, formed in August by executive producer Richard Markell as an XTV breakaway, won the work in May after a seven-way pitch. It has been briefed to create Euro 2004’s entire on-air collateral, says Markell.

He has already created a title sequence and is presenting it to clients tomorrow. The sponsor package is set for completion in the New Year, and the entire project is due for sign off after that, prior to the start of the football tournament in Portugal on 12 June. ‘We have to work with the official UEFA Euro 2004 logo and its family of graphic elements, created by Euro RSCG in France,’ says Markell.

The brief was for an ‘upmarket, contemporary’ look to the channel to compete with rival channels worldwide. ‘The client [at Al Jazeera owner Qatar TV] encouraged us to be experimental and pushed us creatively,’ he says.