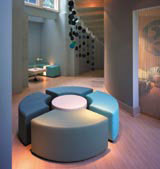 Back in June 2000, the Department of Trade and Industry launched The Challenge Fund, as ‘a resource to help employers to develop and implement work-life balance strategies that would benefit the business, customer and employee’. Since its launch, the fund has provided £11.3m, including £4.6m European Social Fund money, to 401 organisations across England and Scotland to help them kick-start a new approach to working life.

But it is only since the introduction of new family-friendly rights in April, that the work-life balance has become the buzzword on everybody’s lips. The general reasoning is that it benefits both employers and employees, since it retains a skilled workforce and improves the quality of people’s work.

Suddenly a whole section of the workforce is being viewed as ‘flexible’ and ‘mobile’, working perhaps different hours, different days or from home. As such, office environments have started to acquire a different raison d’Ãªtre.

They are no longer the domain of the nine-to-five employee and designers have had to rethink how to organise the office space. ‘Physical space is now more important, especially for those mobile workers [when they come into the office],’ explains Nick Morgan director of briefing at DEGW.

‘You need a space that brings people together and creates a community. So environments need to support group, multitask and mobile activities, and allow the possibility of trailing around the office without having to move all the wires. We are seeing a changing landscape that is less rigorously concerned with individual desks, and instead offers touchdown tables or catering areas that turn into meeting spaces instead,’ he says.

The old, cellular-style, individual office is finally being dismantled. Of course, this isn’t strictly news, the advent of the open office and the abuse of terms such as hoteling and hot-desking has been around since the 1990s. So what’s different today?

‘It’s how the space is used,’ says Morgan. ‘It’s about breaking down physical barriers that don’t allow departments to communicate. This could be the result of high cellular spaces or lots of storage. You need to create more open environments, but balance them with spaces for concentration and confidentiality,’ says Morgan.

Essential spaces now include business booths, pods, communal areas, touchdown zones that might work for a conference call, but that actually become uncomfortable after 20 minutes (to avoid any stalling). ‘The space needs to work harder, you have to think where to allocate the workforce when you have it – it might need to catch up, or download files, or just conduct a chance meeting,’ says BDGworkfutures joint managing director Phil Hutchinson.

It also makes economic sense. ‘Flexible space is easier to reconfigure, you move the people, the computers and that’s it. Only two years ago a move [to another office area] would have been severely disruptive. But not today, if you get your infrastructure right,’ he says.

Just like allowing your workforce flexibility, creating a welcoming space in which to work becomes a business opportunity. ‘It’s about retaining staff, making your property work harder and supporting business aims. For example, [the design of an office] could be used in the shareholder agreement as statement of intent,’ says BDGworkfutures joint managing director Gill Parker.

An innovative move in that sense comes from broadcaster BBC and, in particular, head of interiors John Dee (Client Profile, DW 31 July). The corporation plans to provide a budget of £250 to its workforce nationwide so staff can ‘customise’ their working areas and turn them into desirable living spaces. Bean bags, potted plants and furry toys are among the popular items chosen by staff.

For working parents, allocating a crÃ¨che on-site could be an incentive, yet many staff surveys have concluded that if the workforce is mobile, people are less happy to have children cared for on office premises. Security and number regulations in childcare as well as parking spaces mean that designing a crÃ¨che can be a complex issue. On top of it, workers who commute into busy city centres might not be happy to trail a child along with them. It might just be easier to employ a voucher system or use another employer’s better equipped facilities.

For developers looking to attract leaseholders in the current difficult economic climate, a flexible workplace is an even bigger bonus. Architect Wilkinson Eyre has recently completed the Empress State complex for Landflex in Earls Court. At the heart of the concept is the realisation that offering a complete set of services, from your laundry collection point to a cab booking service and a cafÃ© that doubles as a takeaway centre for those leaving the office in the evening, keeps the workforce happy and immersed in a pseudo-village atmosphere.

This arrangement is profitable for employers as staff don’t pop out for their lunch breaks. ‘The restaurant was designed with a New York-style deli in mind since most people don’t have the habit of sitting down to eat in the canteen any more and might take their lunch back to the desk,’ says Wilkinson Eyre director Paul Baker. The irony of a flexible workplace designed in reality to retain the workforce in the office surely isn’t lost on the developers.

For a workforce seriously on the move, renting space is an added advantage. Wilkinson Eyre created for Landflex a series of ‘business clubs’ in London’s Soho to cater for the ‘laptop culture’. For a membership fee, employees who don’t want to trek down to the Earls Court main office, can rent a meeting room with technological and catering facilities.

In Britannia Row 2, an office development in London’s Clerkenwell, workstations can be rented for an hour, a month or a year. Members benefit from the treatment room, meeting facilities and cafÃ© areas of the development and feel part of a work community. ‘The building takes on board that businesses change. They might be a start-up, need to downsize or upsize according to projects,’ says Orianna Fielding Banks of Gloss Design, which was responsible for the development.

Not all workplaces have adopted the ‘flexibility’ approach so conducive to a work-life balance. In fact, the current legislation only benefits a small percentage of the workforce. Chris Ridgwell, director of Workwise, a management consultancy specialising in new working practices, particularly flexible working and work-life balance, says the new laws are limiting, because they allow only a certain type of employee (parents with children under six years of age) the right to apply.

More importantly, the options available are limited. ‘Because it only allows a change of hours, time, or working from home, it actually excludes a whole spectrum of possibilities such as working while travelling, using desk centres, cyber cafÃ©s or telebarns,’ he adds.

The hope here is that the advent of technology, and in particular wireless applications such as Bluetooth and PDAs, will eventually change working practices and the workspace on such a massive scale to convince all employers that the reign of the nine-to-five is indeed dead.