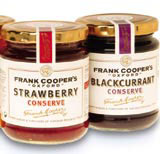 Millini has created the packaging for Frank Cooper’s first ever range of fruit conserves, launching this week, as the brand bids to capture a slice of the lucrative jam sector.

The packaging aims to help the jams mirror the success of the company’s long-established marmalades, says Jonathan Gatward, head of marketing, sweet spreads for Centura Foods, which markets the Frank Cooper brand.

Centura Foods briefed Millini to retain the traditional look of the marmalade range, but also give the jams a point of difference to ensure shelf stand-out.

Millini creative director Grant Howieson says, ‘We have retained the Frank Cooper brand’s equity, which has strong appeal to consumers, but are presenting it in a fresher, more modern way.’

The jams’ labelling is a ‘soft, warm yellow and uses sophisticated colour cues to suggest the fruit inside the jars’, according to Howieson. Though the traditional, hand-written signature still appears on labels, Millini has altered it from black to gold to give a premium feel to the Frank Cooper brand. The group has also developed a roundel device, which replaces the Royal Warrant featured on the company’s marmalade labels.

Millini won the work in April, after an unpaid credentials pitch.