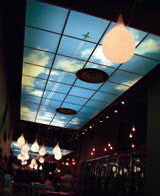 A trip to Ted Baker’s headquarters is not for the faint-hearted. Situated on a nondescript bit of road round the back of London’s King’s Cross, the office itself goes by the factually correct name of The Ugly Brown Building.

The ground floor entrance opens on to a dimly lit passageway. Turn a corner and you find yourself confronted by one of those friendly, mechanical retrievers that looks up at you and wags its tail.

This goes some way to prepare you for the video screen on the far wall, with a live link to the reception desk upstairs. The screen presents a smiling woman in a telephonic headpiece who seems completely relaxed with such long distance communication.

Once you have been greeted and have introduced yourself, an industrial-style lift deposits you three floors up, into the heart of the action. The atmosphere of the industrial chic, open-plan workspace is warm and vibrant, and if you are carrying a cycling helmet you may even get a thumbs up from the (now three-dimensional) receptionist who commutes by bike.

Ted Baker is about personality, a personality that is guarded and championed by Craig Smith, the brand communications director.

It is Smith who gets to write the mythical Ted’s interviews and to keep the brand on track. ‘We’re always compared with Paul Smith, but people know what he looks like,’ says Smith. There aren’t many faceless brands with a personality as strong as Ted’s. In fact, only Mr Kipling springs to mind.

Smith also oversees all the retailer’s graphics communications. And he is responsible for the window displays (for which the retailer is renowned) and the stores themselves, along with marketing and PR.

The latest fruits of his labour can be seen in a new Manchester store, which opened last month. At 836m2, it is Ted Baker’s biggest outlet yet.

The 15-year-old shirts-to-homeware retailer has a communications strategy that would seem to fly in the face of conventional thinking, for Ted Baker spends no money on advertising. This has its both pros and its cons.

The upside is that the 20 per cent of most fashion retailers’ marketing budget spent on ads can be channelled into other forms of communication – namely the interminable flow of quirky marketing literature and fancy window displays.

However, the downside is that any change in perception or direction is more difficult to pull off through such devices alone. At the moment Ted Baker in the UK is looking to push its image upmarket (having found itself tarred by the brush of football hooliganism in the 1990s).

Traditionally, brand awareness has come through word of mouth. ‘It’s a proven way of growing the brand,’ says Smith, who moved to Ted Baker eight years ago from Design House. That’s all well and good, but word of mouth is not the quickest way to change an image.

Still, this gives the designers something to focus on. Smith has a team of seven graphic designers, who are involved, as he says, ‘with everything that has a logo on it’.

They’re also behind all the gimmicks that go out to customers, such as the morning after party survival pack containing mints, torches and packs of cards, which was given to charge card customers last Christmas. In fact, when other customers spotted them, they also wanted a pack.

But the graphics team doesn’t get to have all the fun. There’s a seven-strong Special Projects team, which is responsible for all the stores’ three-dimensional props and window displays – 30 per cent of the annual marketing budget goes on windows. For next year the team is working on something football-related around the European 2004 Championships.

‘It’s unusual for a retailer to control all windows from a single studio,’ says Smith. He’s considering setting up a small satellite office in the US to handle such things as the business grows stateside. At the moment, there are three US stores in New York, Miami and San JosÃ©, with three or four more in the pipeline for the next 18 months.

The Special Projects team also handles all retail interiors, and as well as the US shops, there are ones in Paris and Zurich and a concession in Stockholm.

The store interiors should be entertaining, says Smith, and that includes the staff. In the US, shop assistants are trained with the Ted spirit, defined as English, quirky and fun.

Ted Baker appears very protective of its creative output. ‘We try not to give any design out at all,’ explains Smith. One annual report was designed out-of-house, by Sea Design, but since then, they too have been handled in-house.

The building, which houses 130 staff, has a good buzz to it, which is aided by the open-plan layout. The collections themselves are on show on the floor below, where the kitchen is also located.

Any graphic designer who thought they were restricted to a life of print would be in for a pleasant surprise at The Ugly Brown Building. Here, they would also get to work on fabric graphics, seeing their designs appear on ties as well as invitations.

While all this fun, quirkiness and Englishness is going on in King’s Cross, the brand is up against an increasing number of new entrants. ‘There are ten or 15 new brands every season, and they all want a bit of what we have,’ says Smith. It’s up to the mythical Ted and all his helpers to see off these new pretenders.

Abbey right as rain as it divorces brolly stalwarts