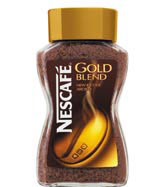 NestlÃ© this week relaunches its NescafÃ© Gold Blend instant coffee, in a bid to reclaim the brand’s premium status and attract younger consumers.

‘When we were appointed in 2000, the jar had been around for years [it was introduced in 1997] and had been designed in-house. It lacked the finesse that we subsequently added and appealed to the 45-plus age range. We wanted to move it down to consumers in their late 20s.’

CPB creative director Stephen Bell says the new-look identity and graphics aim to differentiate the brand in a category ‘saturated by copycat “gold” packaging. The original packaging is basically a golden scoop and a pile of beans. It’s old-fashioned and generic, and the image is just not compelling any more to a younger generation,’ he says.

The identity now boasts bespoke typography and taps into the language of fine jewellery with a hallmarked gold coffee bean. ‘The idea was to create a single-minded icon, and we loved the idea of creating something precious. We wanted [the graphics] to say, “This is the best; this is the gold standard”,’ Bell explains.

He adds that a brown background, which enables the coffee bean to ‘stand out’, and the application of the NescafÃ© branding on the vertical, enhance the product’s ‘premium’ status.

CPB, which started work on the project two years ago, was also responsible for NescafÃ©’s global identity overhaul in 2002 (DW 25 April 2002).

Bioprogress tries to freshen up its product portfolio