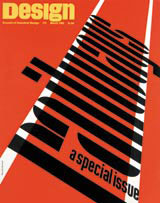 David King is another figure who exemplifies the spirit of independent design. He worked at the Sunday Times Magazine for ten years before starting his own archive of Soviet and Russian photographs. He has produced a series of books, as author, in which he explores this subject matter visually in a way that a conventional historian would not think to do. This really is independent graphic thinking – a way of shaping and understanding important historical information, which you need to be a designer even to attempt.

What do you want the non-professional visitor to take away from Communicate?

In focusing on independent designers, I’m trying to say, look, designers are capable of more than just styling up brands in an attractive way so that customers will like them more and buy more products. Design can be a form of critical thinking.

I want the general public to gain an understanding of how much graphic design has contributed, as both a visual and intellectual activity, to a visual culture in Britain that is as vibrant and lively as any in the world. Yet even now, when graphic design is more deeply embedded than ever in everyone’s experience of the contemporary world, design doesn’t get much coverage in the mainstream media. So, here is a large exhibition in a big London gallery which hopefully stands some chance of pulling in a wider public and explaining and celebrating graphic design’s role.

How does British design compare with that of other nations?

In the early period covered by the exhibition, from 1960 to the mid-1970s, the work produced in Britain was strong and had a new confidence and freshness. But if you measure it against the American ‘gold standard’ represented by, say, the 1960s Push Pin work of Milton Glaser and Seymour Chwast, or Europeans such as Wim Crouwel and Josef MÃ¼ller-Brockmann, you have to conclude that British design was not up to those dizzy levels of excellence.

But, by the early 1980s, with the arrival on the scene of people like Neville Brody, Peter Saville and Vaughan Oliver, we start to create graphic design that was noticed abroad. It influences young designers around the world and is seen as highly contemporary and innovative. Since that time, British design seems to have proceeded with ever-increasing confidence. It is ridiculous and parochial to say that we are ‘the best’ – but British design today is certainly as good as the best European, American and Japanese design.

Grand old man of UK design looks back over a century