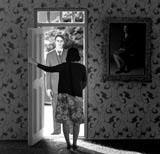 The Royal College of Art promotes an eclectic approach. Olivier Richon, head of photography, says: ‘Here, photography is understood as a medium with no fixed identity – the work of our students celebrates the power of the photographic image and its ability to produce fact, fiction and fantasy.’ This year’s MA students produced a supplement for The Guardian in which Charlotte Cotton (new head of programming at The Photographers’ Gallery) provided insightful texts introducing each student’s work. Idris Khan may have been the surprise hit with the art dealers and curators, but I like the look of Camille Fallet’s quietly dramatic scenarios and urban landscapes.

This year sees the first graduates on a degree in fashion photography at the London College of Fashion. Under the direction of course leader Karin Askham, the 2004 Yearbook reveals a refreshing diversity of approaches. In his introduction to the work, Dylan Jones, editor of GQ magazine, is disarmingly upbeat: ‘Frankly, I don’t think there’s ever been a better time to be a fashion photographer. We’re now living in a world where fashion imagery is not just in huge demand, it is seemingly ubiquitous.’ Particularly notable are Lisa Wellard’s Arsenal fan-style and Wendy Bevan’s moody monochromes.

Meanwhile, coastal towns are hosting an increasing number of photographic courses, from Blackpool and Bournemouth to Southampton and Falmouth. The latter has been going from strength to strength in the past few years, and noteworthy this year were Tom Campbell’s edgy portraits, Stian Nybru’s documentary or Bjarte Rettedal’s stylish images.

In Brighton, the staff team on the BA editorial photography course at the University of Brighton includes Mark Power, Xavier Ribas and Jim Cook. With these large format specialists on board, you may expect to see their approach influencing the graduates, but no – a huge variety of work is going on. Impressive this year were Emma Critchley’s unusual underwater images, Helen Mason’s romantic movie recreations, or Howard John Davies’ poignant portraits. Another course with a long and honourable history, going back to the 1970s, is Nottingham Trent University. This year it organised the Zero8 photo festival in Nottingham, to showcase its talent. I was struck by Charlotte Player’s dignified, formal portraits and Zoe Madle’s black and white imagery.

Fine Art Photography is apparently flourishing at Glasgow School of Art under the course direction of Scott Parsons. Once again I am tempted to see course titles as misleading when you actually see the work being produced. What exactly is art or documentary or fashion or editorial these days? The barriers are down. It’s all about intention and context. Art? Commerce? Who knows. Stuart Donaldson’s beautiful forms, Evan Wood’s wonderfully atmospheric old school monochrome landscapes and Nina Nordbo’s enigmatic approach caught my eye.

Whatever the course is called, wherever it is located, no matter how good the teaching staff are or how state-of-the-art the resources, ultimately it’s down to the individual student’s energy and commitment. In such a highly competitive and crowded marketplace, creativity and ideas are not enough. Above all else it’ll take persistence – it really is tough out there.