Update 21 November 2018: Videogames: Design/Play/Disrupt will move to the V&A Dundee from 20 April to 8 September 2019. For more information about the exhibition, head here.

At a time when video games are “ubiquitous” and game design is constantly “pushing boundaries”, the V&A (Victoria and Albert Museum) has dedicated a new exhibition to this “rapidly-changing” design field.

Videogames: Design/Play/Disrupt explores the role that designers, as well as gamers and critics, have played in developing video games over recent decades.

It looks at how game design has adapted to new technology such as widespread broadband, smartphones and social media which have rapidly changed the gaming scene. 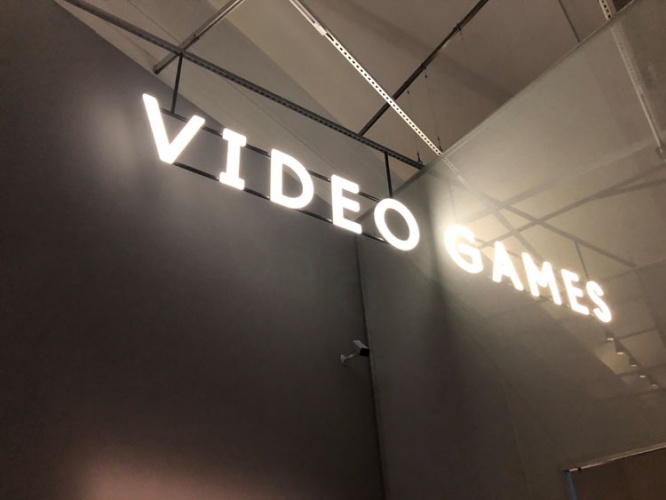 The exhibition, which has been curated by Marie Foulston and Kristian Volsing, curators of video games at the V&A, features everything from larger titles such as Nintendo’s Splatoon to smaller independent names, as well as delving into the DIY arcade scene and large-scale eSports events.

Speaking at the first view of the exhibition, Foulston says: “Design is the lens through which we are looking at video games.

“Even if you play games and are incredibly literate sometimes the concept and the thought of what it takes to make a video game can seem like an impenetrable black box.

“These are designers and creators who have been so generous in opening up their hard-drives and notebooks, letting us pore over rare and unseen artefacts that really illuminate their design practices.”

Highlights include glimpses into the early stages of the design process for games such as The Last Of Us, with designers’ sketches and character prototypes on display.

It also looks at social issues surrounding video games and how narratives about ethical and political issues have been woven into games.

Tristram Hunt, director at the V&A, says: “The exhibition investigates video games from the mid-2000s onwards, following this pivotal moment of rapid advancement and tracing the profound effect that technology has had on the way video games are designed, discussed and played.”

The exhibition space has been designed by Pernilla Ohrstedt Studio. 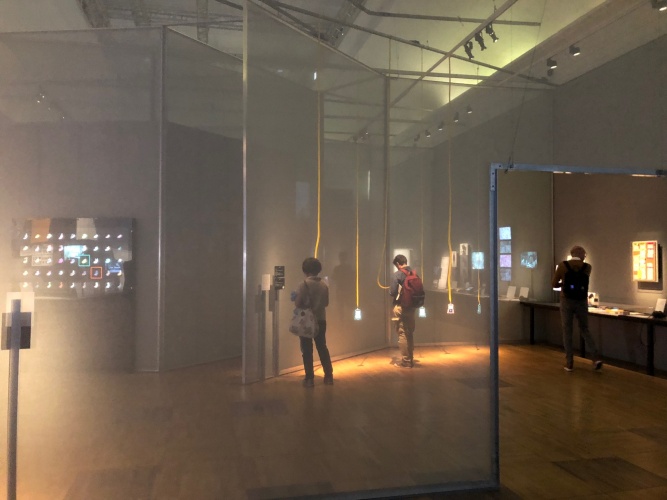 Ohrstedt, founder at her self-named studio, says: “It’s a fascinating subject and I’ve learnt so much over the past year about the advances in technology and tools that have allowed this plethora of different types of video game to flourish.

“It is becoming a much more diverse field as many more people are able to create games with smaller means. I think the exhibition is trying to show this sort of innovation.”

Ohrstedt has taken techniques used in video game design to inform the design of the exhibition space, for example, greyboxing. Greyboxing is used by video game designers to roughly “block out” simple shapes and colours in a game to see if the layout of a level works, before creating the final graphic design assets.

Working with Squint Opera on audio-visual design, Julia Studio on graphic design and Coda to Coda on sound design, Ohrstedt has taken further inspiration from gaming to create the wayfinding and signposting for the event. 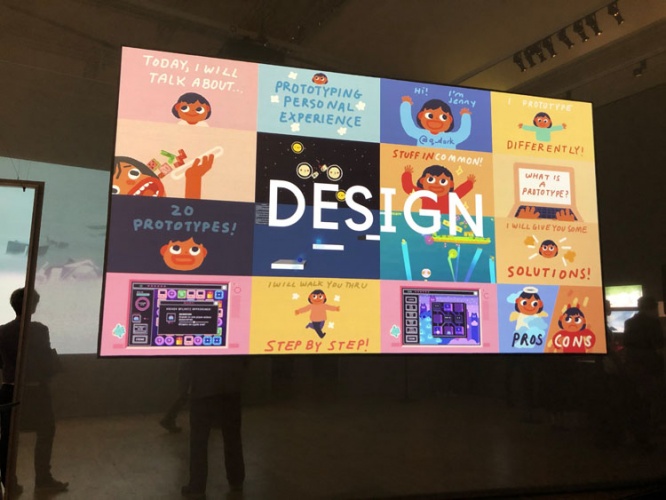 “Our job as designers is to create a framework to show this largely immaterial content,” she says. “Most of it is presented on screens and as moving images so that has been our challenge – to create a canvas for all this content, to give it shape and form.”

Keen to provide a backdrop for the “rich” and “vibrant” content to speak for itself, the studio has opted for a “greybox” backdrop with varying hues of greys and black.

“Often in video game design you start creating the design by “greyboxing”, then adding the colours, hues and textures,” Ohrstedt says.

“Often in video games you also have a light that signals your next quest, so we are using white light to guide the visitors,” she adds.

Visitors are guided through four themed sections, which have been created by subdividing the exhibition space in Room 39 and the North Court of the V&A.

The first section looks at a selection of games from a new generation of designers and the craftsmanship and design process behind the titles.

Each was chosen as they either have an interesting design story or represent some form of innovation.

Games featured include The Last of Us by Naughty Dog, which the game-makers compare to a Hollywood production in terms of scope, and Journey, a smaller independent game, which is included for the “emotional” landscape it creates.

Highlights include sketches from games such as The Graveyard, three-dimensional (3D) digital models of buildings in Bloodborne, a wall of GIFs taken by virtual camera drones from No Man’s Sky and items which influenced designers, such as surrealist artist René Magritte’s painting, Le Blanc Seing. 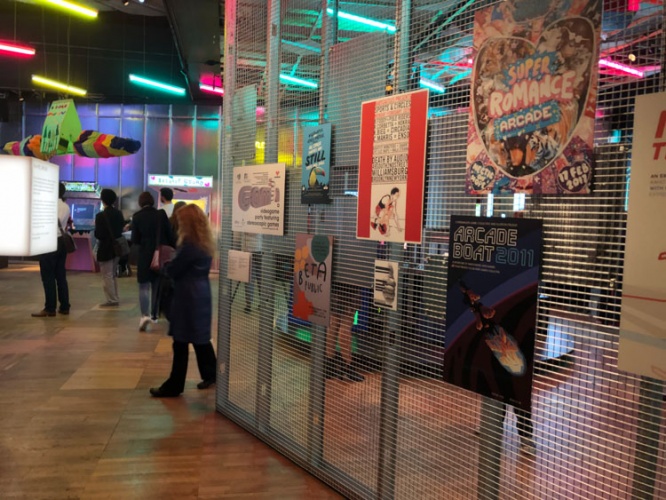 In terms of design, each room aims to have a unique atmosphere, Ohrstedt says.

In the first room, a “distance fog” effect mimics the way that far-away items are often hazy in games, allowing the player to focus on the task at hand.

Grey, gauze-like partitions let visitors see a vague outline of what is in the next part of the exhibition. “The projection screens are stitched on to this distance fog so it becomes like a canvas of an oil painting,” Ohrstedt says.

In the second room, the issues surrounding video games are explored, with interviews with game designers and commentators on a large video screen discussing issues such as how video games deal with sexuality and gender identity, and whether they discriminate against certain groups.

Around the room, exhibits in glass cabinets look deeper at issues such as inclusivity and censorship, with examples of games that have subverted problems by exploring sensitive subjects in play.

Ohrstedt, who has used photographic, multicoloured light filters to highlight the works in this room, says: “Some video games have been blamed for instigating violence or being ‘only for boys’ and this room tries to describe the discussions that are taking place and provide ways of thinking about these things differently. There is some really thought-provoking content here.”

One highlight is a look at satirical app Phone Story, which was banned from Apple’s app store, sparking debate on who decides what games can be about.

The app critiques the way phones are manufactured and takes the player on a journey which includes a game featuring a forced child labour mineral mine in the Democratic Republic of Congo (DRC) and a manufacturing plant in China where overworked staff leap from buildings.

Profits from the game were set to go to charity, but according to the V&A exhibition, it was removed from Apple’s App store, due to the nature of the content.

The third section looks at games where the players become creators and designers themselves, often as part of large online communities, displayed through videos on a large, curved projection screen in a dark room.

Here, Minecraft features heavily, with a highlight being the recreation of Westeros from Game of Thrones. Fan art, cosplay (costume play) and eSports also feature in this room.

The fourth and final section explores the do-it-yourself (DIY) arcade scene and features interactive installations and allows visitors to join in with some games.

This colourful, neon-light-filled room includes plenty of unusual and “rebellious” arcade games – the kind that pop up in places such as bars, with unusual titles such as Enviro Bear 2000 and Breakup Squad. 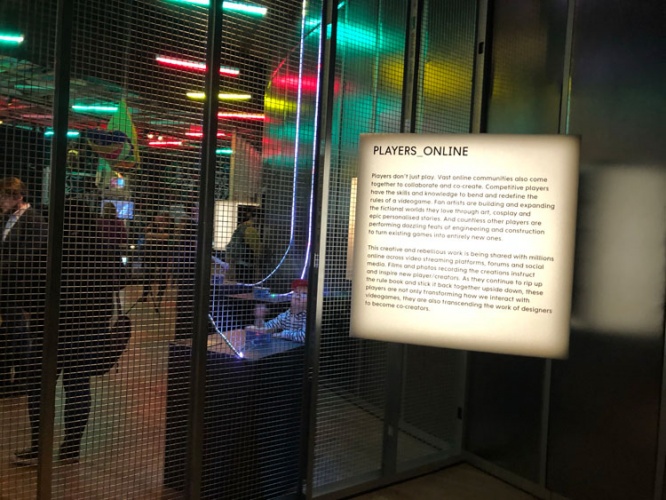 Ohrstedt says: “A lot of the game designers that appear in the DIY arcade room where you can play, interact and have fun also appear in the second room critiquing the game industry, [which they want to] push forward.

“Even though it is in a playful atmosphere in the DIY arcades, the points they are putting across are very profound.

“So there is a very intimate link between these two spaces”.

The title of the exhibition is presented as an illuminated “floating” white light sign, which hangs in the first room.

There will be some interactivity, with opportunities for guests to play some video games in the first and last rooms.

But Ohrstedt says that this has been limited to a few instances as the goal of the show is to “show things that you cannot see at home”.

With some video games taking as long as 30 hours to play through, part of the challenge that she and the curators have faced was figuring out how to boil this down to selected sections for the exhibition.

“The curators have really honed in on why they want to show certain bits. There are drawings, test footage and behind the scenes content,” she says.

Content is presented in a variety of ways, including large-scale projection surfaces, LED screens, physical objects, videos and interviews.

Coinciding with the exhibition, the V&A is inviting a UK-based designer, artist or maker to apply to take up a video games “residency” at the museum from 15 October until 15 June 2019.

The museum is also expanding its digital design collection and has previously held related events such as a video game-themed Friday Late and a digital design weekend.