Manchester-based creative consultancy Music has designed a handbook that illustrates how employers in the creative industry can better support neurodiverse workers. The project, titled Creative Differences, was commissioned by Universal Music UK.

The handbook explains that while neurodiversity is largely valued in creative spaces, very few workplaces actually have environments and practices in which neurodiverse workers can thrive.

The project, which can be accessed online here, is accompanied by a series of animations also produced by Music, that document the lived experiences of eight neurodiverse people. 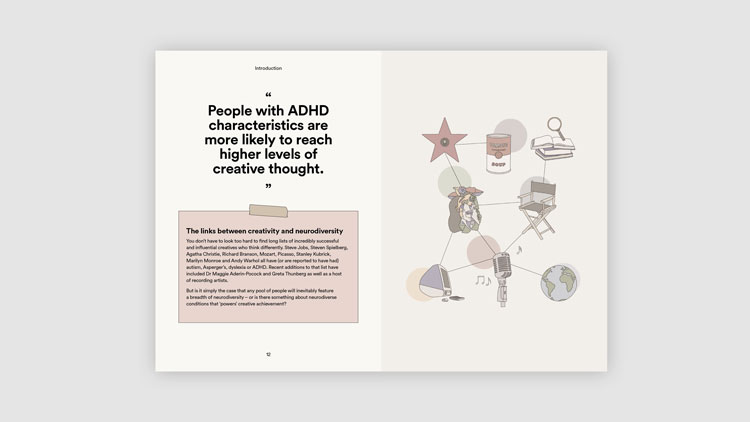 Universal Music UK approached Music with a brief to design a layout for the information in the most accessible way possible.

“They specified that people with dyslexia needed to be able to read it,” says senior Music designer Lowri Evans. “We had a lot of text that we needed to make user friendly.”

To best achieve this, several accessibility-minded design decisions were made. These included the printing of the handbook on cream-coloured paper stock, and the 12-point sizing of the text.

“From research, we found out people with dyslexia have a hard time reading from white paper and similarly find it hard to read smaller text,” Evans says.

Additionally, Evans adds, the text has been broken up significantly, making it “easier to digest” in shorter pull-outs and boxes. These are supplemented by illustrations by London-based illustrator Megan Rhiannon, who herself lives with autism. 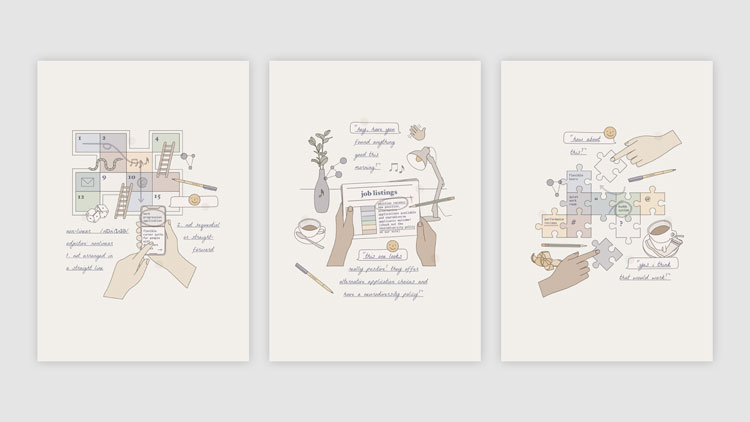 Balancing the breadth of information with accessibility needs was a particular challenge for the Music team.

“There was a lot of information from Universal’s research that needed to be included in the handbook but printing in 12-point text, we didn’t want to increase the page count significantly,” says Evans. “A really long handbook wouldn’t have been accessible to everyone.”

Similarly, she says, perfecting the science behind the paper and colour choices was important. The cream-coloured paper stock used, in connection with the muted colour palette, has the effect of a “more calming read” according to Evans. 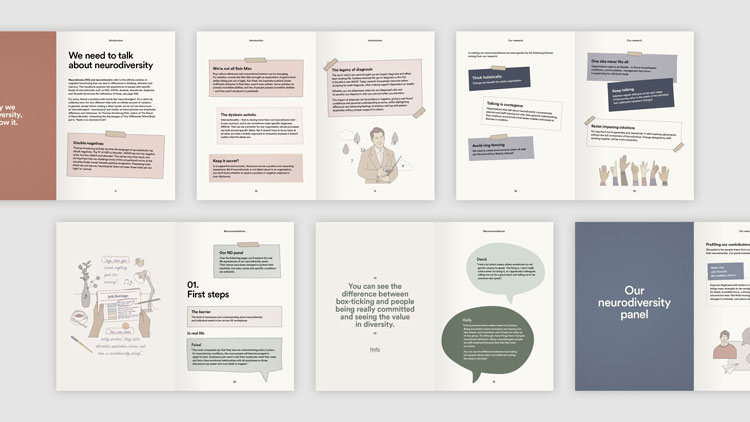 “We want everyone to read it”

As many as one in seven UK workers are neurodiverse, living with conditions such as Austistic Spectrum Disorder, Attention Defecit Hyperactivity Disorder, dyslexia, dyscalculia, dyspraxia and Tourette Syndrome.

Loud office environments, complicated job applications and enforced group work are just some of the very common workplace practices that can act as obstacles for neurodiversity.

In designing the handbook as accessible to all, Evans hopes the recommendations put forward by Universal Music UK will reach beyond those living with the conditions mentioned. “We want all employers and workers to pick up the book, so that they might understand how neurodiverse people work and how they can support that.”