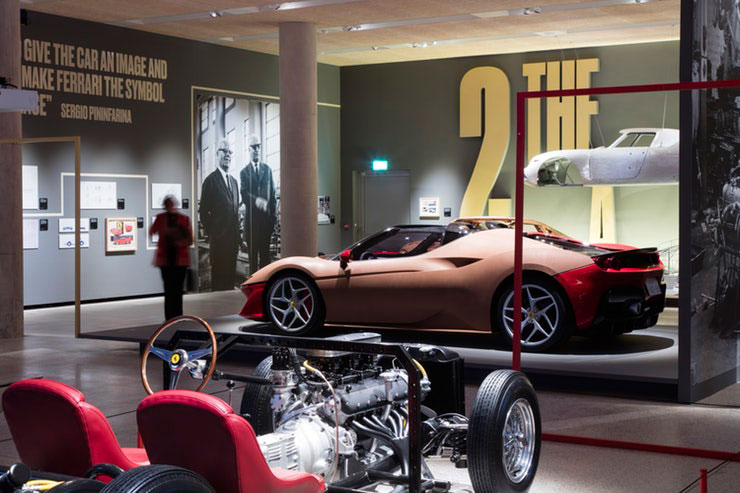 Pentagram partner Marina Willer has designed the visual identity and exhibition design for a new show on at London’s Design Museum dedicated to the history of Ferrari.

Ferrari: Under the Skin is split into six sections, which contain roughly £140 million worth of cars, alongside original sketches and memorabilia related to the car brand.

Willer’s concept for the exhibition aims to “go beyond the red and clichés of masculinity” associated with Ferrari to provide a more “immersive experience” that offers insight into the craft of the cars, says Pentagram.

The visual language of the show takes cues from the Ferrari archives; material swatches and modelling clay used by Italian car design company Carrozzeria Scaglietti in the 1960s have informed the red, gold and grey colour palettes in the space. 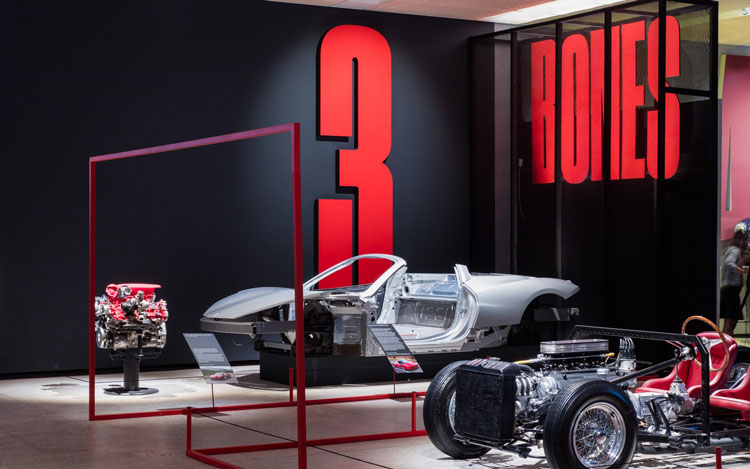 Supergraphics and large-scale signage on the walls have been inspired by the condensed typeface used in old Ferrari promotional materials such as posters and brochures. Italian typeface Forma, also used across vintage materials, has been used for body copy throughout the exhibition.

The large signs have also been constructed as three-dimensional objects throughout the space to reflect the “physicality of the cars”, adds Willer, rather than painted onto the walls. 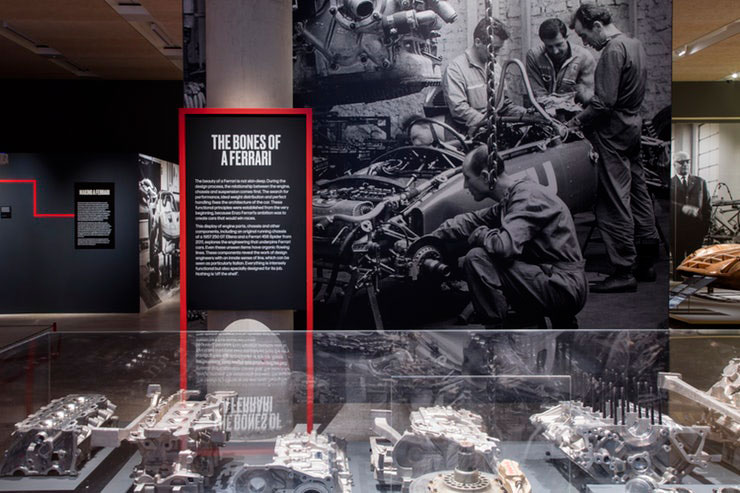 A wayfinding system for the exhibition is made up of directional markings on the floor, which are inspired by those on the floors of the Ferrari factory in Italy.

This line concept has also been used in three-dimensional, red, square and rectangular framing devices, which are used to border exhibits and explanatory text on the walls.

Spotlighting has also been used to highlight certain areas of the show and make it “feel theatrical and create ambience”, says Willer.

The six sections aim to explore Ferrari “behind the scenes”, the Pentagram partner adds, by delving into different areas of the manufacturing and driving process. This includes how the cars are modelled, how they are engineered, and the personal stories of the Formula One drivers associated with the brand. It aims to demystify the “glamorised myth that circles Ferrari”, says Willer, and reflect “the quality of the craft”. 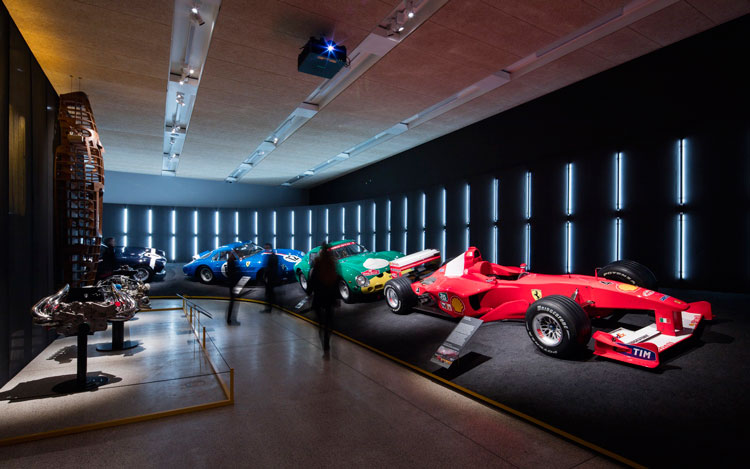 Alongside the exhibition space, Willer’s team have also worked with photographer Paul Zak to produce the print and marketing materials for the show, and two films which are featured within it.

These use over 100 clips of archival material, with the first devoted to Ferrari’s history of race car drivers, and the second focusing on car design, engines and the “beauty of engineering”, says Pentagram. 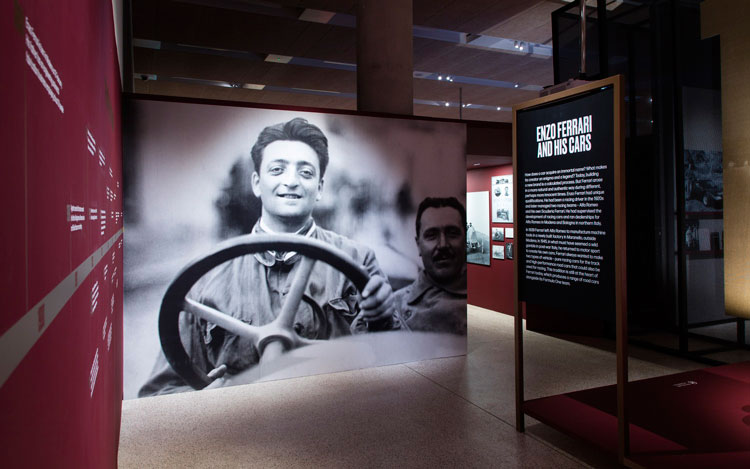 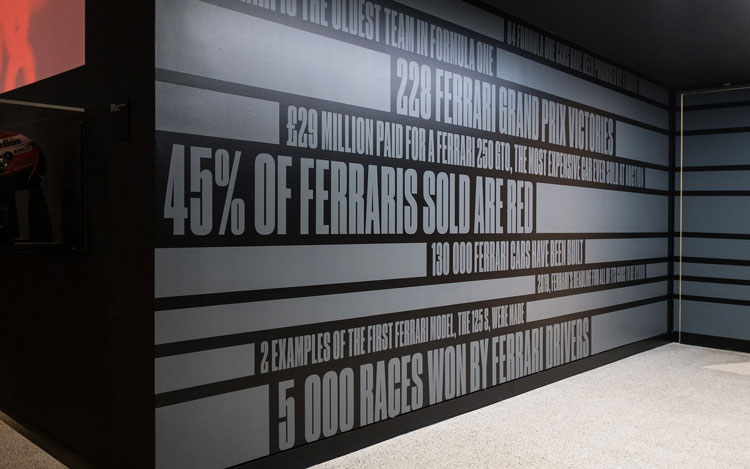 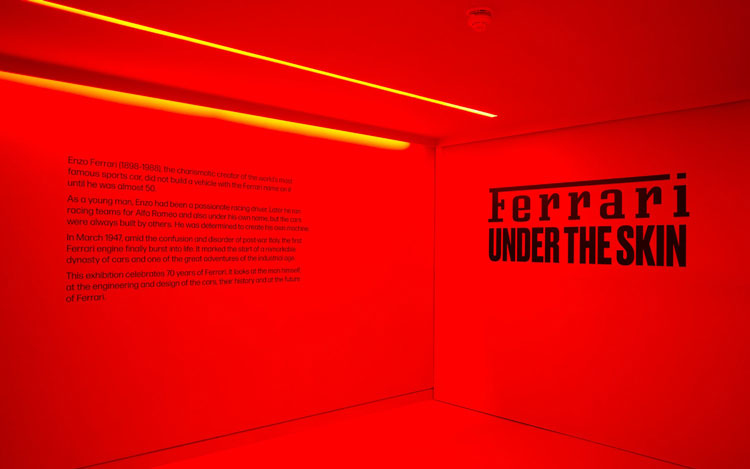 Mini to build co-living and working complex in China